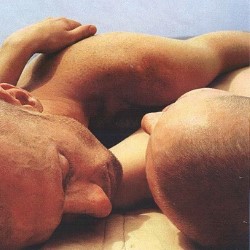 A thrilling and poignant love story of the most unconventional kind.

"The most unconventional of love stories"

Trying to explain Once… to someone not familiar with DEREVO’s work is not an easy thing to do. At heart, it’s the most unconventional of love stories, exploring the intense confusion and almost unbearable cacophony of emotions which descend upon us when in the throes of ardour. To witness, it falls somewhere between the realm of dream and cartoon, as the actors onstage lurch from one bizarre scene to the next in a spectacular piece of physical theatre.

Imagine the unbounded imagination of Studio Ghibli combined with the cartoonish weirdness of Tim Burton, the clownish slapstick of Charlie Chaplin and the unsettling pervasiveness of Nosferatu and you might come somewhere close to nailing down this chameleon of a show. The storyline loosely follows the trials of a downtrodden street-sweeper as he attempts to woo an elegant waitress – a quest that is doomed from the outset. However, it frequently abandons the script for celestial car chases, police man hunts and extraordinary feats of bravado.

Those who demand a linear plotline and lucid storytelling will no doubt grumble at the production’s repeated tendency to drift into abstract surrealism, but anyone prepared to sit back and enjoy the ride will surely leave the theatre feeling disorientated, inspired and above all, exhilarated. It’s not often that you can step into a room at 11.30am on a Wednesday and be transported so completely to another world.

The five-strong cast are superb, with Anton Adasinsky particularly mesmerising as the protagonist and Elena Yarovaya exuding a childlike grace in the role of his intended. Elsewhere, the smaller roles of Cupid and the cosmic police officer are excellent cameos, while there is still room for a whole roll call of fantastic beings to enter and exit the elaborately constructed set. The dreary, cubist metropolis which acts as the backdrop to the action is complemented perfectly by the wonky chairs and interactive paintings which adorn it.

At 80 minutes, the relentlessly opaque and absurd tone of the piece could be too much for some, and a more grounded storyline might have helped command the attention for longer. But for anyone who has ever dreamt, or been in love, or dreamt of being in love (which surely covers everyone), this otherworldly production captures the quintessence of the experience with unmatched skill. It’s shows like this which make the Fringe – and theatre in general – worth attending.