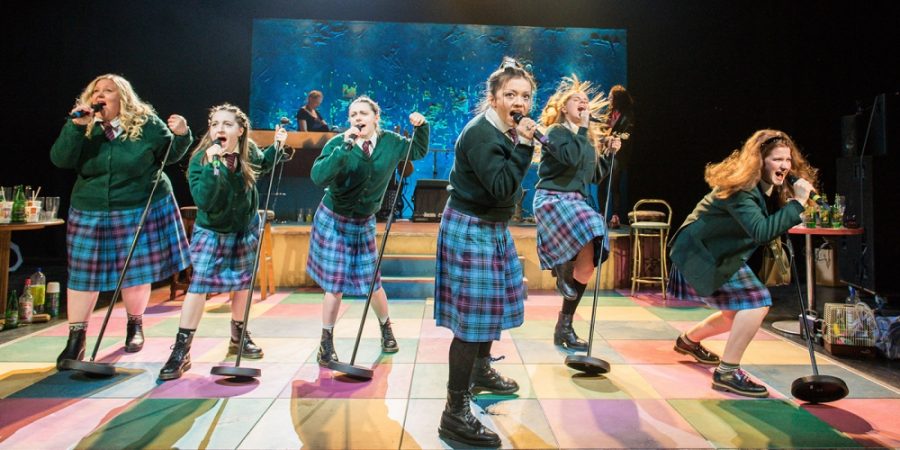 Our Ladies of Perpetual Succour

An alcohol fuelled, intoxicated musical adventure as Catholic girls find their wild side.

An exuberant, energetic musical rocks the stage, following the exploits of six not-so-well behaved Catholic Girls as they visit Edinburgh for an epic night out. Based on Alan Warner’s 1998 novel, The Sopranos, this hilarious adaptation from writer Lee Hall and director Vicky Featherstone marks a co-production between National Theatre of Scotland and Newcastle’s Live Theatre.

We follow the girls from Oban who are on a school choir trip but have their own agenda in their free time in Scotland’s capital city. The production perfectly portrays the manic, Sambuca fuelled antics that the girls get up to and the essence of a wild night out is gleefully replicated. The hosts of characters the girls meet along the way are performed with gusto by the girls themselves with spot-on transformations in vocal and physicality. It’s hardly subtle but adds to the full-on visceral quality of the show as the girls head off in separate directions which lead them to odd parties, grotty nightclubs and old man pubs. It’s not for the faint-hearted as the girls have a colourful way with language and their own blossoming sexuality.

Along the way these wonderful actresses also perform some beautifully arranged musical numbers (including a number of Electric Light Orchestra songs) with pitch perfect vocals and a live band on stage which adds to the atmosphere of a wild night out.

The play soon falls into the familiar trap of discovering each of the girls’ issues that trouble their home lives but it’s never too bogged down in melodrama and the night continues to provide much humour along the way. The production suffers from not having an interval however; at 110 minutes long, it does the play a disservice, as the episodic nature of the play becomes more prevalent. The lack of a toilet break on a wild night out is not really recommended.