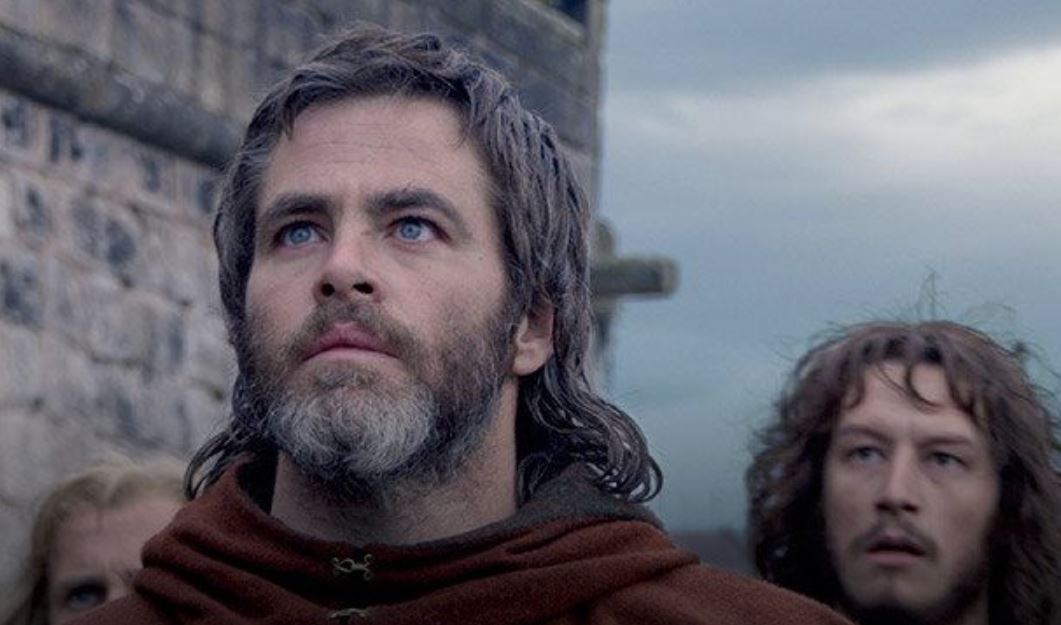 Slow-moving epic prioritises history over entertainment - but struggles with both.

It’s over two decades since Mel Gibson gave Scottish history the Hollywood treatment, so perhaps it’s about time that we’re served up another helping. For all intents and purposes, this new film picks up where Braveheart left off, with poor wee Scotland humbled by those blackguard English and Robert the Bruce considering a life of rebellion.

The film opens with a roving single-take scene, which follows the Bruce as he pledges fealty to his new tyrannical overlord Edward I and into a not-so-friendly bout of play fighting with his son Edward II, before the English smash Stirling Castle to smithereens with a bloody great trebuchet. It’s an impressive start that sets out the grandiose stall Outlaw King aims to maintain for the length of the picture. Unfortunately, it’s probably the film’s best moment, as we descend into a confused and slightly stodgy retelling of the Bruce’s life as a fugitive.

To its credit, the film does make a better fist of historical accuracy than Braveheart, which invented love affairs and betrayal plots willy-nilly in a (successful) bid to win over audiences and magic up Oscars. Outlaw King sticks to the script by and large, notwithstanding some fast and loose artistic licence with some of the dates and all of the dialogue – although it can surely be absolved on this last point. Less forgivable, however, are some of the downright bizarre decisions with regards to direction and story.

Most glaringly, the film packs up its bags when the Bruce is barely halfway into his rebellion. Instead of a grandstanding Bannockburn to finish the piece, we’re treated to the (admittedly impressive but overstatedly significant) Battle of Loudon Hill, as well as a completely fabricated showdown between Bruce and the hammy arch villain of the piece, Edward II. It’s an obvious ploy to leave the way open for a sequel, but the decision forestalls the inclusion of Thomas Randolph’s daring recapture of Edinburgh Castle (he doesn’t even feature) or any number of other exciting scenes from Scottish history. The lack of conviction in planning for part two also means that the clumsy postscript announcing Robert’s eventual success feels cack-handed and weird, and all too sudden.

Equally troubling is Mackenzie’s reluctance to confront the darker aspects of Robert’s character. The biggest blot against his name, his dispatch of throne-rival John Comyn at Dumfries church, is dealt with in an unsatisfying and perfunctory manner, then barely referred to again. In his eagerness to paint the Bruce as the flawless hero of the piece, he neglects an opportunity to really get inside the man’s psyche. Instead, Chris Pine’s depiction of Scotland’s liberator is as a gruff and gallant do-gooder who only did bad because his hand was forced.

Supporting characters are even more loosely traced. Robert’s right-hand man James Douglas is played with one-dimensional mania by a below-par Aaron Taylor-Johnson and Billy Howle’s over-the-top impression of Edward II is more pantomime than gritty period drama. Elsewhere, Mackenzie seems to have tried to emulate the runaway success of Westeros by stuffing the cast full of Game of Throners. Stephen Dillane, James Cosmo, Ron Donachie and Clive Russell could quite easily be playing the exact same roles as in the series.

Not that the cast can be held overly to account. By and large they acquit themselves well (aforementioned hammer-uppers aside) and the Scottish accents are surprisingly passable. It’s more that the script itself moves along sluggishly; by choosing historical veracity over melodramatic action – and only half of the history, at that – Mackenzie has backed himself into something of a corner with the film’s pace. On the other hand, sticklers for accuracy are unlikely to be happy, either; Outlaw King does nothing to undo the lies woven about the Bruce in Braveheart and the fictional duelling scenes which bookend the film damage its credibility.

The final product is a worthy attempt to tell the story of one of Scotland’s most important heroes – but one which falls some way short of the task. It’s watchable enough stuff and well-made to a fault, but with such rich source material, it could have been so much better. As such, it’s unlikely to surpass Gibson’s Marmite effort for either the lovers or the haters.