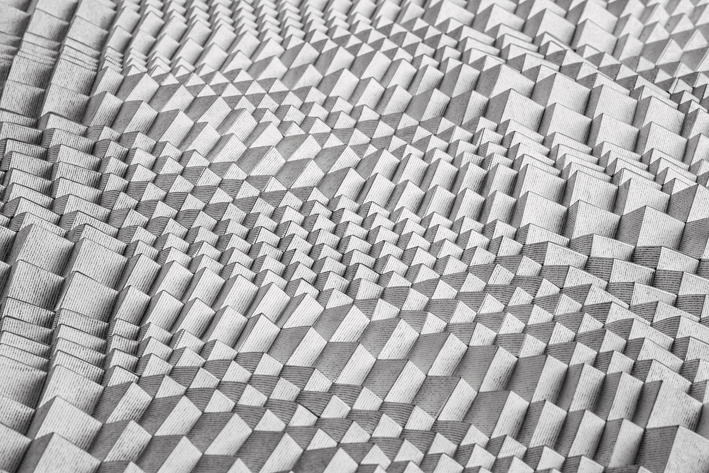 Over Under: Under Over

Featured alongside the annual OPEN SSA + VAS show which takes place at the Royal Scottish Academy, The Cordis Trust presents Over Under: Under Over in partnership with Visual Art Scotland. Over Under: Under Over is an exploration of contemporary and experimental tapestry making. Composed of six artists of various backgrounds and approaches, the exhibition collectively seeks to explore the wider applications of the woven form.

Bursting colour and inviting textures adorn the walls of the exhibition. The tactility of the works encourage close examination, as the artists employ unconventional and modern materials such as gold paper and lead alongside the more traditional materials of woven mediums such as wool and silk. The blending of mediums creates a rich dialogue between colour, surface and form.

Dail Behennah has a degree in geography and creates vessels in a similar way to the construction of a 3D map. Geometry and mathematics inspire the patterns that make up the forms. Amazing expanses of geometric pattern adorn the walls, with light dancing off the small squares that make up the surfaces. Influenced by the history of basketry, Behennah builds and constructs to create intricate shadows and line play. Similarly, Sue Lawty employs this sense of minimalism and precision within her pieces, often utilising lead as she seeks to create “an understated restraint, balance, tension, rhythm: an essential stillness.” [1]

Contrastingly, Elizabeth Ashdown’s works explode with rich colours and extravagant woven shapes. One of the few still practicing the art of passementerie, which is composed of decorative trimming such as tassels, braid, and fringing, Ashdown is an avid supporter and promoter of woven textile designs. Her works are rich in surface and composition; their weave captures a sense of energy created through the passementerie technique. Sadhvi Jawa’s works complement Ashdown’s well, as they too reflect a vitality of texture and colour. Influenced by her current residence in Bangalore, Jawa uses tapestry as a means of exploring people and places.

Celia Pym employs knitting and darning across various fabrics and surfaces in order to convey and speak to human experience which conjures a distinctly playful element to her works. Sarah Jane Henderson‘s tactile works interrogate the sense of human interaction, engagement and play, particularly given the immaterial nature of our digital world. Gesture very much informs Henderson’s pattern and technique and alongside the other artists, speaks to the principles of weaving.

Overall, a very pleasurable exhibition which explores the potential for craft to evoke the historical and cultural significance of weaving in the city of Edinburgh.