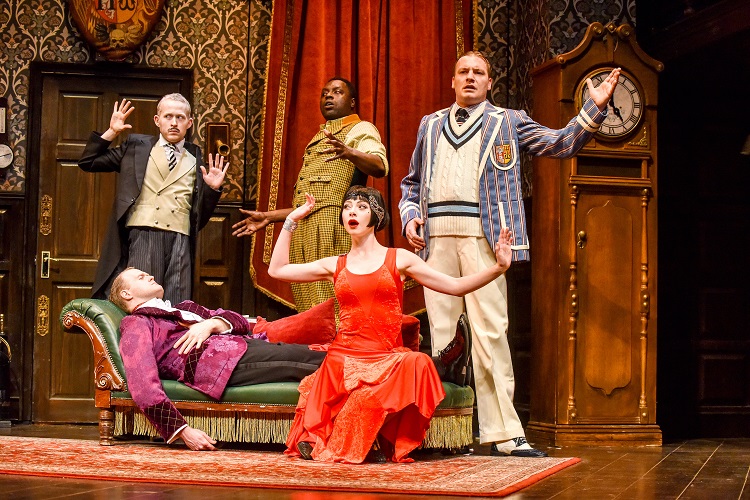 The Play That Goes Wrong

The talented cast of performers are safe hands as Olivier award-winning show returns to Scotland.

The talented cast of performers are safe hands

Since 2014, The Play That Goes Wrong has been a staple of the London’s West End. In 2017, the play made its Broadway debut and has been playing to audiences on the Great White Way ever since. Now, it’s yet another turn for regional audiences to step inside the world of Mischief Theatre, under the façade of the Cornley Polytechnic Drama Society.

The play that is going wrong is Murder at Haversham Manor. It doesn’t take a theatre geek to realise that this production, other than being a total deliberate disaster, is paying a strange homage to Agatha Christie’s The Mousetrap.

Before the houselights are down, we are watching action unfold. Stage managers and techies scramble through the auditorium asking people if they’ve seen a missing French bulldog. There’s shouting, there’s panic and there’s a requirement for someone sitting in the stalls to give a hand in securing the set. Of course, this is all part of the show. Mischief Theatre haven’t just created a performance that goes wrong, it’s a production that goes wrong.

The ability to make things that are definitely going wrong on purpose seem accidental is done with ease. With a cast member casualty, Elena Valentine is dragged from pillar to post like a rag doll. Kazeem Tosin Amore as Collymore is hanging by a thread (almost literally) due to a poorly built set. Even the stage manager is a victim of the antics. We feel like we are actually watching the local am-dram company have the worst (or maybe even best) show ever.

Admittedly, not every joke in the dialogue is entirely their own. The Two Ronnies Mastermind sketch, Basil Fawlty and the moose-head and the wonderful Acorn Antiques have obviously been an influence on the work.

In comparison to some of its West End neighbours, The Play That Goes Wrong may be lagging behind. It’s low budget (although unashamedly as it is, after all, an amateur drama society) and the comedy is nothing but silly. However, this is a perfect fit. Regional audiences who are usually the ones filling the seats as part of the local theatre staple will relish seeing it all going badly wrong. There’s schadenfreude to it; we want to see it going wrong but safe in the knowledge that “no, honestly, that was supposed to happen”.

This talented cast of performers are safe hands for Mischief Theatre’s most famous work. It’s rather meta yet a highly easy concept to grasp. Hard not to laugh and impossible not to appreciate the ability of making it all go wrong with ease.