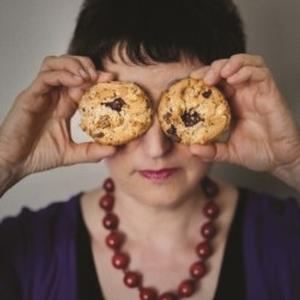 An uncomfortably deadpan satire on the state of society.

As a Jewish woman of Russian descent who has spent time living in Swansea, London and now Birmingham, Naomi Paul has quite a rounded worldview. In her show Price (still) Includes Biscuits, she allows us insights into her upbringing and her opinions on various facets of politics and the state of the modern world, delivered with deadpan diction and catchy choruses of her own making.

For her show Paul adopts an almost schoolmasterly persona, addressing the scant audience with unblinking eyes and a gaze that seems to be invariably drawn to a place just above our heads. Her pokerfaced and monotonous delivery doesn’t telegraph the punchlines as with many comics; instead, the viewer is forced to pay close attention to the clever satire in her words to catch the intelligent humour underneath.

She makes a number of astute observations on the state of our society at present, including the government’s unfair championing of austerity and the subversive scariness of excessive vigilance. These insights are interspersed with anecdotes from her childhood and simple, unpretentious songs which reinforce her message. In case you were wondering, the title doesn’t lie – the biscuits do make an appearance. However, the planned ‘biscuit break’ only adds to the feeling that this is an awkward community meeting in the town hall, peopled by strangers with not much in common and no particular inclination to break the ever-hardening ice.

Paul relies heavily on audience interaction for several parts of the show, and though her manner is not threatening or aggressive like many a Fringe comedian, these sequences can’t escape an undercurrent of discomfort. This, of course, is not helped by the fact that there are a mere four audience members on this particular occasion and these segments would certainly go smoother with a bigger crowd. As things are, the atmosphere becomes somewhat stifling at these moments and the show stutters as a result.

This discomfort is not helped by Paul’s emotionless and unnerving stage persona, which melts away as soon as the show is over. Undoubtedly it’s an intentional part of her character, and it certainly does add something to the recitation of her songs and set-pieces – it’s just not entirely clear whether that something is altogether desirable in a stand-up show.