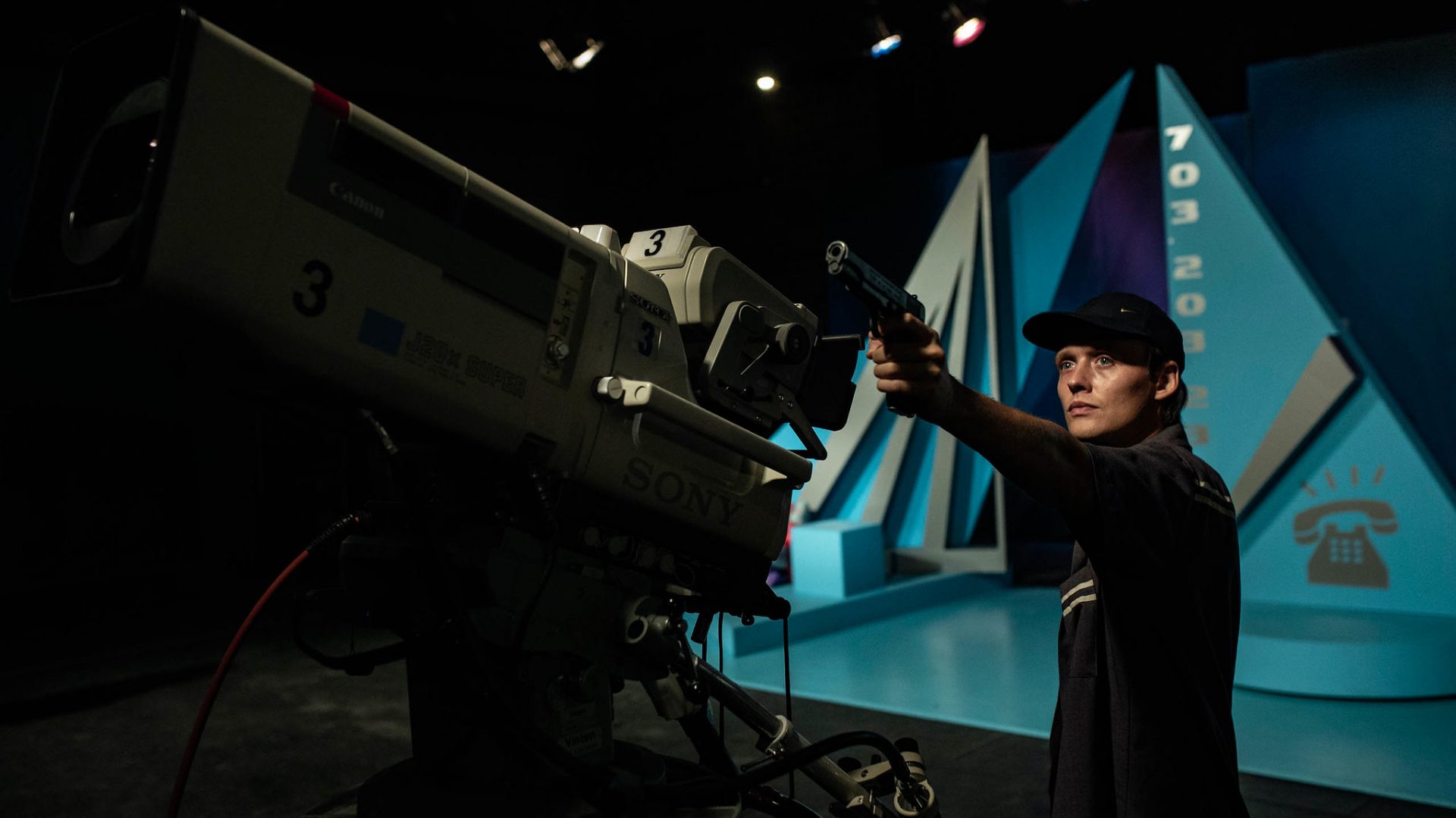 On the eve of a new millennium, a disgruntled youth named Sebastian invades a Warsaw TV studio during a live broadcast of the new year celebrations brandishing a gun. Determined to have his say on air to the Polish people despite being cut off by the producer, Sebastian causes mass panic in the studio by holding hostess Mira and security guard Grzegorz hostage until his demand is met.

The trouble is, the channel suits don’t want to play ball. The police are summoned in huge numbers and Sebastian finds himself continually thwarted by negotiators who attempt to outwit him, a father who ridicules him and a channel chairman who simply stalls for time. As the evening stretches on, Sebastian becomes ever more frustrated and fraught in the oppressive atmosphere of the studio, while his two hostages are similarly exasperated by the studio’s prioritisation of their precious airtime above two human lives.

Prime Time is a claustrophobic pressure cooker of a film, exploding out of the traps with a vibrant first 15 minutes that instantly snag the audience’s attention. Although it struggles to maintain that intensity for the duration, it remains a thoroughly engaging watch that’s underpinned by the raw emotion and restless energy of Bartosz Bielenia in the lead role. As we try to unpack the mysteries of what Sebastian’s urgent message might contain, we gain snippets of information that build up a picture of a desperate and deeply unhappy young man. Bielenia commands this personality with a sublime performance that not only wins over the audience, but also the two hostages under his care.

From the moment Sebastian shakily waves his weapon for the first time, it’s clear that he’s never in control of the situation and probably hasn’t even fully thought through what he wishes to say. That helplessness only makes his plight the more pitiful, especially in the face of uncaring studio executives and a police force whose relentless masculinity tramples all over the more nuanced and sensitive suggestions of the single female officer who tries to connect with Sebastian. Given that TV was (and to some extent, still is) a mouthpiece for the propaganda of the government at the time, there’s a strong case to be made that Prime Time is a political allegory more preoccupied with Sebastian’s inability to communicate his message than the message itself.

After the volatility of the opening scenes and the sustained anxiety of the following hour, Prime Time was always going to struggle to stick the landing with its denouement. As a result, there are likely to be some viewers who find the final curtain somewhat anticlimactic. Nonetheless, the wild ride that reaches its conclusion is more than entertainment enough to warrant the price of entry, while the implicit meanings and possible explanations that the film dangles ensure it offers plenty of cud to chew over after the closing credits. This, alongside another sensational central performance from Bielenia, ensure that Jakub Piątek’s debut feature is a highly promising one.