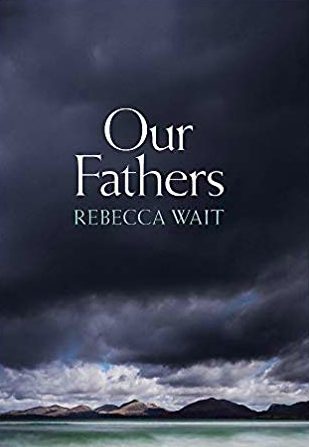 When young Tom was 8, his father took a shotgun to his whole family – mother, brother, sister and finally himself. Only Tom survived, and since then, he has led a half-life, wondering why his father spared his life. Our Fathers begins, when, as an adult, Tom comes back to the remote Scottish island of Litta where this unspeakable crime took place. His Uncle Malcolm takes him in for a few days, but the days soon turn into weeks as Tom begins to revisit his life.

Tensions mount as Tom expresses his anguish – they should all have known. His Uncle, his Aunt Heather, his parents’ friends, that small community. Tom holds them all accountable for his father’s actions but the trauma in Tom’s life and his blunt manners make him an unreliable narrator and Rebecca Wait uses this to cast a shadow of doubt over his words.

Wait’s prose derives inspiration from the Hebridean location of the action. Litta has a desolate, foggy, damp climate and memories from decades ago are dredged through this half-here half-elsewhere setting. The island theme is powerful, serving to heighten the tension in the small community. People who have known each other all their lives are pitted against each other when Tom appears in their midst. And through all of these emotions, Tom must uncover the truth – was his father “a decent man who just snapped”, or was there something altogether more sinister about him? Can he trust Malcolm, or are they cut from the same cloth? The book does a wonderful job of showing the lines adult men tread around each other. In Malcolm and Tom’s interactions are the undertones of modern day masculinity, and how hard it is for men to keep their emotions hidden.

The storyline alternates between the past and the present. The threads that run through time are Tom’s memories and the location. Tom’s relationship with his brother Nicky is deftly explored and it is his loss that hits Tom the hardest. In this story of love, loss, betrayal and redemption, Wait expertly crafts a tale that revolves around family – perhaps the most ephemeral bond of all – although it is somewhat predictable in its resolution.