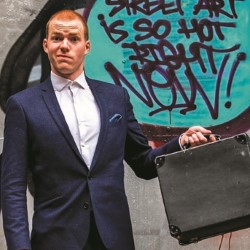 Sam Fitton: A Case of Wonders

Family-friendly fun with an ethereal vibe.

Gasps of wonderment and child-like glee accompany Sam Fitton’s Free Fringe magic show. At the kid-friendly time of eleven in the morning, Fitton’s A Case of Wonders is a great way to spend an hour with the family.

Fitton’s missed his train to Manchester and is stuck on the platform until the next Virgin Express is due. While asleep he’s transported to the Edinburgh Fringe where ethereal tricks and awesome stunts fall effortlessly from his hands.

The show’s narrative is entertaining, although drags a little at the start, and Fitton’s comedic interludes are off-the-cuff and natural. As they should be in a magic show, the tricks are stellar. Producing confectionery supposedly from thin air earns a whooping applause all round, further encouraged by the fact Fitton shares his sweets with the crowd. Two tricks involving money really give the audience something to marvel at. A particular highlight is Fitton’s juggling and light sequence cleverly choreographed to a cracking 80s tune. Combined with mystical lighting and levitation some tricks feel like you’re in a Hogwarts charms class.

One downside is the distance the audience is from the stage. Given there are a number of times Fitton shows the audience whatever is in his hand – to determine it’s a normal pack of cards or a regular pound coin – only the first and second rows have decent views. The rest of the crowd have to take the others’ word for it. It detracts from some of the less visual, more fiddly tricks.

And at times the background train station sounds are loud and overbearing. It’s more foreground noise than anything. It’s not all the time, but there are instances where big booms and whistles make you want to cover your ears. They’re only small negatives though, as much of the show demonstrates Fitton’s skill and wonderful stage presence.