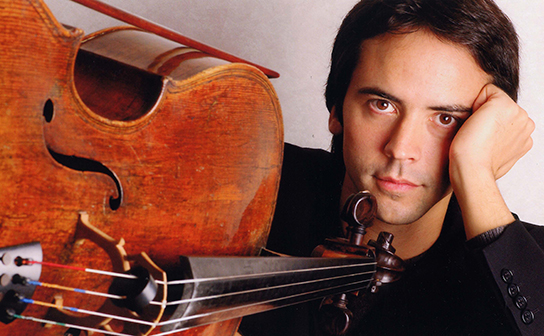 The SCO’s programming is often straightforward, but can also be a bit crazy, such as tonight. The concert starts with Baroque Song, an orchestral piece by the French organist, Thierry Escaich, who succeeded Duruflé at the church of Saint-Étienne-du-Mont in Paris. His organ music is well known, his orchestral music less so.

This piece is extraordinary in its fine detailing, density and colour. It starts with a tribute to one of Bach’s organ chorales and then takes it on a journey, searing strings to the fore. Baroque counterpoint is also an element here, especially in the slow movement—an aria in which the Principal cellist (Philip Higham) has a difficult cadenza, which he plays brilliantly. This leads straight into a great dance, almost evoking the world of Couperin.

Next, the French conductor and soloist, Jean-Guihen Queyras, plays Haydn’s cello concerto in D. This is a work that dates from the composer’s time at Esterházy, where he had the resources of good musicians. It is elegant and almost symphonic in style, and the last movement is a humorous one: a feature of Haydn. Both soloist and orchestra are on fine form.

The SCO excel in quasi-period performance practice, and tonight’s performance of Beethoven’s third symphony is no exception. This piece is as revolutionary (Beethoven had dedicated it to Napoleon, but later rescinded this and called it Eroica), as it is devastatingly modern, even to today’s ears. Featuring natural horns, with all their wonderful out-of-tuneness, the orchestra give this rendition a thrilling clarity, which shows off all the composer’s creative genius.

It is a work that most people have heard played many times, but nothing like this. The slow movement Funeral March has a wonderful tread, and the Scherzo is quite superb. Alexandre Bloch conducts with fabulous verve, and from memory; the orchestra rise to the challenge magnificently. A packed Queen’s Hall enjoy it: it is certainly a special concert.