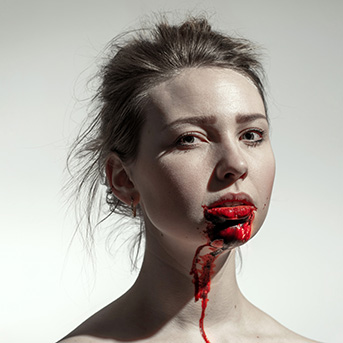 This is a portrait of a fearsome character

Writer and performer Isla Cowan’s monologue, She Wolf, employs an interesting narrative stance. Protagonist Maggie speaks to us as if we are wolves in a zoo enclosure that she is visiting. The choice of animal is deliberate. Maggie is in awe of us, envious of our habit of partnering for life and our deceptive ferocity, and she understands that we aren’t the most popular animal in the park.

After setting up this premise, the play is then populated by a series of memories, from Maggie’s Aunt Tania who used to be bring her to the zoo and give her advice, to stories of boyfriends who left her, and bosses who patronised. There is a common thread running through them. Maggie feels wronged and sees herself in a state of attack, wrestling with a fight, flight, or freeze response. She is also an outcast, looked upon as odd by others with no apparent support system.

Cowan is a magnificently bold orator and through the course of the monologue she shifts state from reflective to angry to manic to possessed. Gory images are a recurring element that jar us as Maggie imagines pouncing on her enemies and ripping them apart. At first, it’s pure fantasy, but we begin to wonder how far the daydreams reach and proceedings take an ominous, visceral turn as lighting changes cool the atmosphere and the narrative descends into frightening territory. Cowan’s physicality is also impressive as she leaps and crouches like a canine, embodying the wolves Maggie idolises and demanding the audience’s attention.

This is a portrait of a fearsome character who is deteriorating before us in a fascinating manner and Maggie is a representation of the insecurities and pressures facing any damaged, isolated person. She Wolf combines psychological horror with contemporary confessional and the results are captivating.