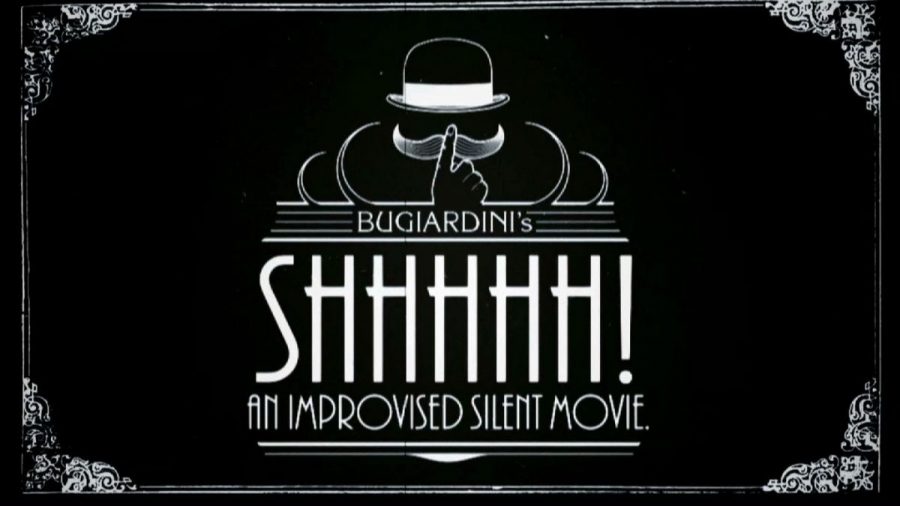 An improvised show without words, in the style of a Silent Era film

Shhhh – An Improvised Silent Movie is what is says on the tin – apart from not actually being a movie, of course. It is created by Italian improv group I Bugiardini as a way of finding a language that could work internationally and be enjoyed equally by deaf audiences.

The show certainly looks very like a Silent Era film, with the cast in suits and braces (or black dresses for the female third), and hold up blackboards with instructions for the audience at the beginning and end of the show. The story is determined by an audience member, chosen to write an occupation on a blackboard. This time it was “the ninja warrior”, and the story revolved around Pau Chan as he trained to become a ninja, by cutting up many flying apples, and found love.

Intertitles are periodically projected onto the scrim at the front of the stage, filling in some of the lines, as in a silent film. However, there are some long mimed conversations without any text to supply meaning, so it’s not always clear what’s happening.

I Bugiardini have some innovative staging ideas. There are no props (apart from a couple of chairs), but performers frequently step in to play trees, or use the movement of their hands to show objects, like falling chunks of apple. At times they also mime a thought bubble coming out of another performer’s head, along with its contents, to show what a character is thinking.

There was a fair amount of laughter from the audience. The humour was, obviously, mostly physical, though some of it comes from the intertitles. There are varying opinions on whether it is acceptable for productions to imitate the past in using words or performing actions now considered unacceptable. Those who feel it is not might have been troubled by a lengthy joke based on sexual harassment in this particular performance (there is no way to know if this type of thing is a regular feature of Shhhh!), as a ninja repeatedly pinched a woman’s bottom then used his ninja skills to hide while she searched for the culprit.

Shhhh! is a reasonably amusing and entertaining hour, and will have a particular appeal to people who appreciate silent-era films.