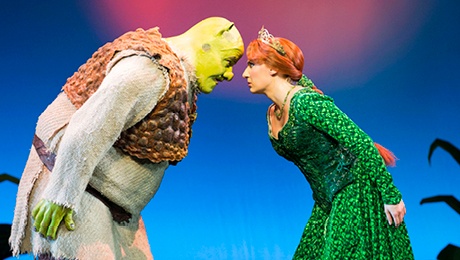 The anti-fairy tale returns to the Edinburgh stage

As the Christmas festivities return to the city, there’s over-priced hooch and crowds aplenty. But in the theatre, magic can be found with the returning smash Shrek the Musical.

Shrek, though, is known for its off-kilter form of magic. The Princess is brash, the steed is a noble donkey and our hero is a tad ogreish – a fairytale like no other. Its humour at times is risque, its songs catchy and reminiscent of Monty Python in places. There’s astounding visuals with a few surprises along the way. Oh, and perhaps an antagonist to trump even the panto crowd favourites.

Lord Farquaad, marvellously performed by John Lithgow in the film, was humorous, charming, but hardly in the pantheon of cinematic villains. On the stage, however, Samuel Holmes just excels. Farquaad doesn’t steal the show, he is the show.

This is down in large part to the creatives behind the curtain. Shrek the Musical is a spectacle musical, relying heavily on costume, effects and props which truly boost Farquaad’s stature. Tim Hatley has crafted something utterly whimsical this evening, breathing life into a fully mobile puppet Dragon, who seems to have been torn right from the screen. In a production so heavily influenced by fairytale, this level of detail and world building is remarkably impressive.

The only downfall (besides the absence of All Star) is Laura Main as Princess Fiona. The antipathy to all things Disney, Fiona is the anti-princess princess. Brash, crude, flatulent and fiery, Main just doesn’t quite scorch the stage in the right way. Her passionate outbursts just fall a little flat. She’s sweet, heartfelt and conveys her emotions well but just doesn’t have the oomph Fiona needs.

Shrek is never going to punch like big hitters such as Les Miserables or The Lion King, but by God will it take pop-shots. Gags are in the foreground, background; there are obvious jokes, subtle jokes and puns. What better way to close out the year, than with a series of laughs?

So for 2018, take some advice from an Ogre: don’t worry about being the hero. They’re pretty dull, and one can never be their own hero anyway. So instead, be a freak, that’s what the world really needs. Be a dragon. Be something people didn’t believe in until they witnessed it soar.