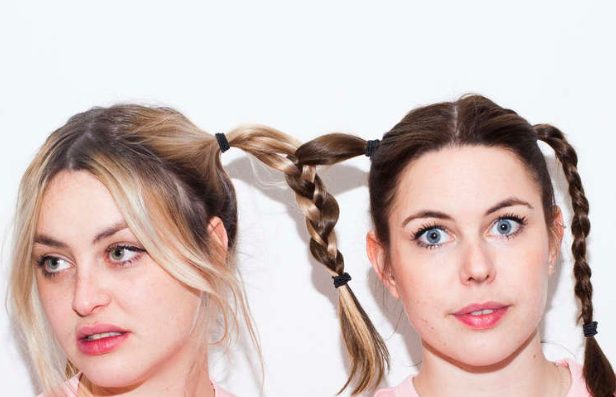 Absurdist sketch comedy from real-life sisters is undeniably funny if a little self-indulgent at times.

Siblings: Acting Out, the sketch double-act made up of real-life sisters, Marina and Madeleine Bye, begin their show in darkness, their faces lit only by handheld torches. It’s a deliberately melodramatic start, which dissolves into silliness within moments as we hear the inner thoughts of each sister in turn. It’s a very clever opening, serving to clearly differentiate the two women and to establish their respective on-stage personas quickly and efficiently.

Acting Out is an hour of sketch comedy, with each sketch effectively standing alone. There’s an over-arching plot to the show, but it very much takes a back seat to the character comedy. The sketches themselves are universally good – a little self-indulgent at times, perhaps, but undeniably funny and written with a distinctive voice and style. Of their few returning characters, the strongest are two ‘yummy mummies’, all insincerity and one-upmanship. The preparation for these characters gets almost as many laughs as the characters themselves, with each sketch becoming increasingly preposterous, until the inevitable groaning conclusion. Their ability to transform themselves with the addition of only a couple of items of clothing or props is hugely entertaining. Their mannerisms can sometimes be similar, but they’re each strong enough performers to make this only a minor quibble.

A poor audience “volunteer” who’s dragged into their shenanigans becomes a key part of the narrative. It’s a risky play – the ‘Siblings’ are not always kind, and an uncooperative volunteer could have changed the dynamic of the show uncomfortably. They’ve chosen well tonight; their target gamely dancing around the stage and taking the verbal punches in the spirit in which they’re intended.

The climax of the show is unexpected and well executed. Unfortunately, it relies on an understanding of their relationship outside the sketches and characters they’ve been portraying. That’s something we haven’t seen enough of, and so the ending of show feels forced and abrupt; but the eventual triumph and redemption of the audience volunteer makes it all worthwhile.