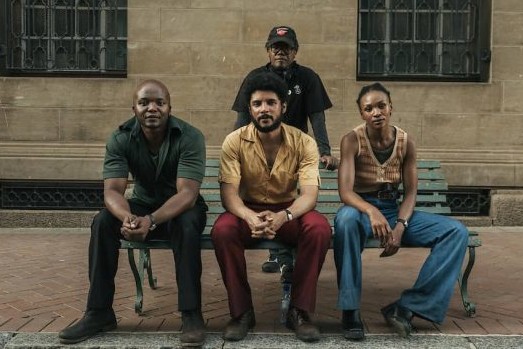 This Netflix film was inspired by true events, the Silverton Siege in 1980, during which three armed activists of the ANC’s uMkhonto we Sizwe (“Spear of the Nation”) wing – occupied a bank in Silverton, Pretoria.

The siege was a desperate act to escape after the trio had to abandon their original operation, to sabotage an oil plant. That operation had descended into chaos because an informant had betrayed them to the authorities. This group considered themselves freedom fighters who were trying to make the country ungovernable and so destroy white rule.

The true-life hostage-takers were male but in this film are replaced by two men and a particularly vicious woman, Mbali Terra Mabunda, played by actor Noxolo Dlamini. The leader is Calvin Khumalo portrayed with sensitivity by Thabo Rametsi. We see the violence their lives entail, the film opening with a gun battle as they are chased through the streets of Pretoria. There is murder and cruelty throughout, even though Khumalo’s cry to the hostages is, ‘Stay calm, go home.’

The characters portray a cross-section of society: the bolshy hostage, the good cop who sympathises, and the bad cop ‘Little Crocodile’ who plans to annihilate the trio. Included in the mix is an American, reminding the audience of the international influence and Christine (Elani Dekker) the daughter of the Justice Minister. Christine represents the liberal white view, yet while motherless she was raised by a black nanny.

The siege is set during apartheid so contains the language and the prejudice of those times. Much of the dialogue is in Afrikaans, the tongue of the oppressors. In contrast, the black actors speak in English or indigenous languages (the cast were encouraged to use the regular polyglot fluidity of their real lives).

The tension builds as the forces surrounding the bank close in. The trio argue – who might be the rat in their midst? These are noble hostage-takers, caught up in this violence for altruistic reasons. Making the film reminiscent of Dog Day Afternoon. There is also something of Butch Cassidy and the Sundance Kid about it.

Silverton Siege contains many of the expected twists and turns of the genre. Although an enjoyable watch, there is little new in this film. It is a tested formula which works.

Available to stream on Netflix