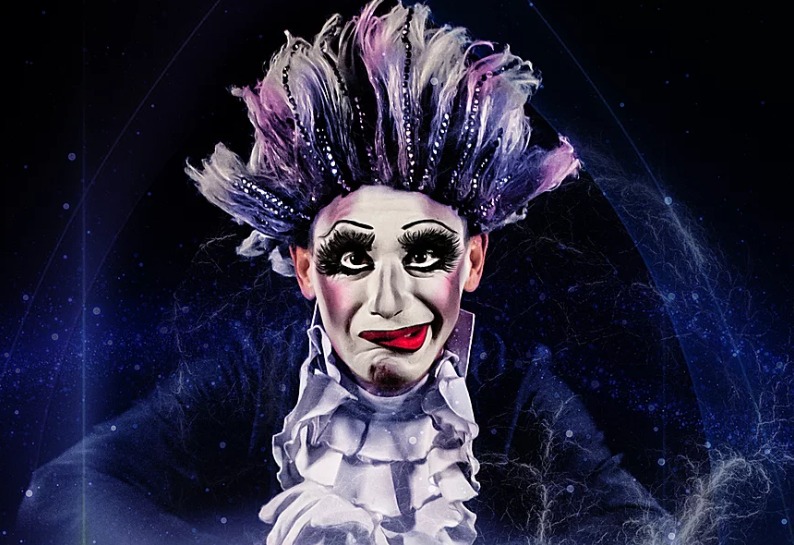 Any woman will tell you that applying full face make-up in under four minutes is fairly challenging, but add to this the extra burden of an anticipatory audience and no mirror, and it becomes a very impressive, nigh on impossible, feat. This is how Martin Kent, a Spanish/Argentinean mime artiste, starts his show Slipstick. The resulting white, almost kabuki-style make-up, is a stark backdrop against which he frames his ensuing acts.

Drawing from across the world of stage and screen, the scenes are not restricted by genre although Kent tends to impersonate women: one minute he is skipping around the stage dressed as Dorothy from the Wizard of Oz, in the next he magically transforms into Tina Turner complete with tight dress, killer heels and spiky wigs that seem to breed on stage.

At times this somewhat surreal but clever act moves into truly bizarre territory. The relevance of Kent dressed as a giant baby in a pram is unclear and the reason why the Mona Lisa is suddenly sporting a giant cloth penis seems lost in translation. One quite explicit scene, which involves Kent dragging a member of the audience to the stage to be enrobed in a giant condom, raises questions over the 12+ suitability rating and whilst mildly amusing, doesn’t really add to the show. Kent is an imaginative performer with a varied repertoire and this foray into slightly risqué material just seems awkward and misplaced.

The most impressive aspects of this show are the truly lightning quick changes and the ingenious costumes and props. A split male and female costume allows Kent to morph into a pair of ballroom dancers, whilst in another scene he plays Maria from the Sound of Music, and is suddenly joined by a mini chorus of holy sisters. The costumes instantaneously set the scenes, but ironically somewhat mask the mimicry. With minimal props and no famous reference, Kent’s parody of a woman selling a health tonic is perhaps the truest demonstration of his not insignificant talents.