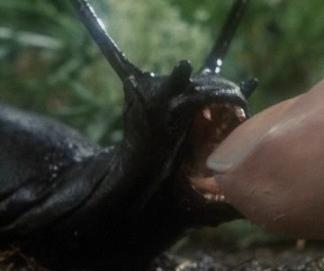 Gooey, gory creature feature is inept, but not without its charm.

If you like your creature features gooey, gory, and unintentionally hilarious, then Slugs may well be the film for you.  Directed by cult grindhouse director Juan Piquer Simon (Pieces) and based on a novel by prolific lowbrow horror writer Shaun Hutson (Victims, Deadhead), it comes with a certain level of trash pedigree.

The plot is a familiar one of humanity’s nefarious effect on nature.  In this case, dumped toxic wastes inadvertently creates a breeding ground of mutated killer black slugs.  When the bodies start to pile up, local health inspector Mike Brady (Michael Garfield) joins forces with a slug expert to destroy the menace without the help of the authorities, who refuse to believe in the slimy menace.

Curiously, a Spanish and US co-production, what becomes immediately apparent is the bizarre disconnect when American actors interact with Spanish actors who have been obviously and haphazardly overdubbed.  Exhibit A: Emilio Linder as Dave Watson.  In some instances it’s clear that the Spanish actor isn’t even speaking, yet English lines have been added.

This bizarre dialogue soup, along with some frightful acting and shoddy plotting would sink a less robust vessel.  However, some decent effects work and some genuinely nasty moments salvage things to some extent.  This mix of comic ineptitude and gruey kills proves rather entertaining, and would make a fine addition to any beer and bad movie evening along the lines of the Kickpuncher episode of the sitcom Community.

One particularly horrendous moment of body horror sees poor Emilio/ Dave come to a violent end through death by contaminated salad containing the parasitic flukes inside the slugs.  An explosive nose bleed into a glass of white wine is a very neat touch that really sets the teeth on edge.  Such scenes indicate that a particular sensibility is required for maximum enjoyment of the film; a strong stomach along with a fondness for absurdist kitsch.

Slugs is not a good film by any means.  It doesn’t even reach/ plumb the same heights/ depths of unintentional so-bad-it’s-good genius like The Room or Troll II, but there is some fun to be had.  Perhaps the most amusing thing about it is the love and care Arrow Video have lavished upon such a curio.