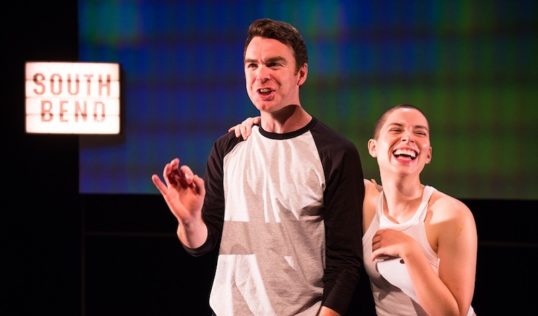 Gridiron's tale of a romantic culture clash is funny in parts but is it a strong enough story?

Edinburgh based Grid Iron Theatre Company have a strong reputation for innovative site-specific theatre. Their latest offering for the stage, Martin McCormick’s South Bend, is an autobiographical road story performed by McCormick himself along with Jess Chanliau (playing 25 different parts) and supported by David Pollock with live Foley on stage.

McCormick is now one of Scotland’s most exciting new playwrights having won the Critics Award for Theatre in Scotland Best New Play in 2015 for Squash. On stage at first alone, he initially invites you to enter his story by posing a challenge for the audience. Is it true or is it false? Or perhaps parts of it are and parts are just a fabrication? So, the tale begins.

He recounts how, in 2006, he flew to America to be reunited with a woman he had fallen passionately in love with during a visit to the west coast. She is the ideal California girl, but now lives in Indiana – the Midwest, a different country! – and he finds she’s changed completely. This is not California, and this is not Scotland, and her step-mum hates the British. He’s soon desperate to get back to Scotland.

Holding the stage for an hour, McCormack is an engaging and lively performer who clearly loves telling his story with humour. He only plays himself and the audience cannot but warm to him. The more difficult role is taken by Chanliau who must create many different roles including the girlfriend and her mother. Clearly an accomplished physical performer, she captures the Midwest style with ease, although is less successfi; with the flaky, laid-back California attitude and delivery.

Both artists are supported by outstanding big screen graphics and Foley by David Pollock who is clearly the third part of the relationship. The company clearly had fun re-making the texting images of 2006. These, together with graphics and sound, move the story along giving the location the right vibe. Situated on stage in a makeshift bar, Pollock is at times mesmerising.

This is clearly a story about clashing mores and cultures; more exploration of these differences would have been welcome. Whether misplaced love and disappointment is really a strong enough through line is also debateable. South Bend is funny in parts, sympathetic and entertaining along the way, but there’s no real hardship, just a slightly lacklustre misplaced adventure.