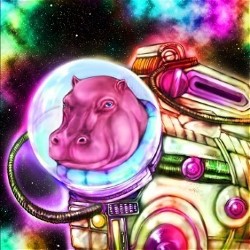 These little shadows are filled with such character and charm

All life on earth is going to end in five years and there is nothing that can be done to stop it. So, humanity decides to send a hippo into space, as you do. But they don’t just send any hippo, but a wild hippo who has to leave her baby behind. Follow Space Hippo and her food-dispensing robot as she encounters warring aliens hellbent on stopping her from getting back to earth and her baby.

Two time-travelling aliens have arrived on earth to tell the audience that the world is going to end. But not to worry, by launching a hippo into space there is now universal peace! The aliens, only one of whom can speak English, the other only Japanese, give a condensed version of how it came to be that Space Hippo was launched using two hand puppets; one a scientist hippo, and one a politician hippo with a suspiciously Trump-esque hairstyle. It’s a fun set up for the main action – Space Hippos adventures in space.

To tell the complete story of what happens next, the two aliens sit down next to a projector and the stage goes dark. A Bowie-style song begins as the two puppeteers use over 200 shadow puppets to project the story onto the blank screen in front of them. The puppeteers also provide all the voices and pew! pew! sound effects, with the English speaking alien giving all the translations and plenty of laughs. The plot is unsurprisingly, completely bonkers. Who knew so many alien civilisations worshiped hippos? But the characters are so well drawn, literally as well as figuratively, that you just go along for the ride.

These little shadows are filled with such character and charm that you end up being wholly consumed by the action on the screen. It is a sign of how well the puppeteers have the audience in their grasp when there are audible gasps when the little Japanese-speaking robot is hurt. That isn’t to say the action is perfect and seamless. It’s not. But it’s the slight imperfections that make it work so well. This is live storytelling, not a pre-made slick production.

Space Hippo is charming, sweet and fun with plenty of laughs to be had. The two performers are superb as they deftly manipulate the beautifully drawn puppets while voicing all of the action as you follow Space Hippo on her epic adventure.