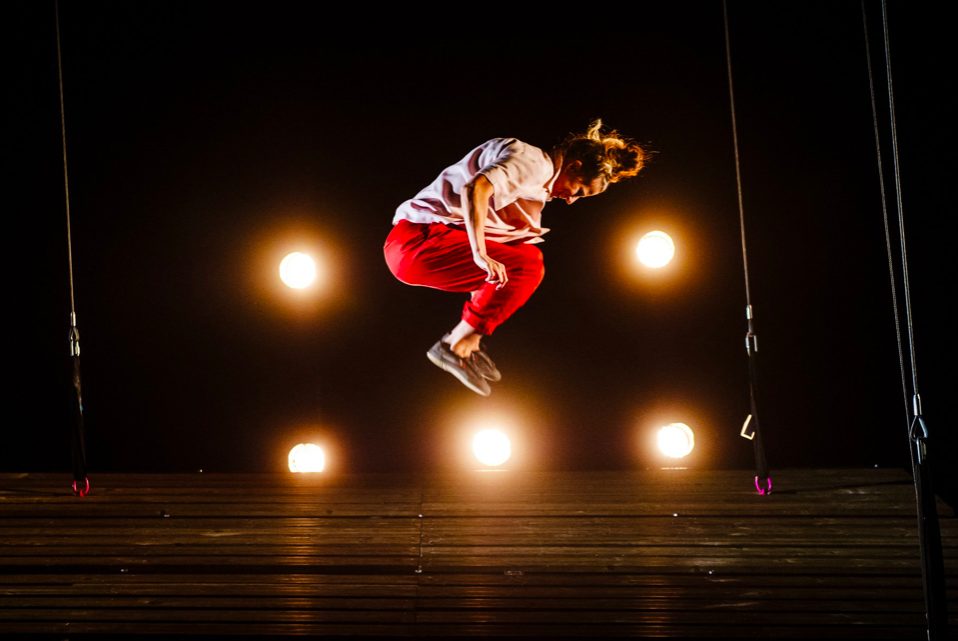 Staged has certainly one of the most striking, and strikingly beautiful, opening visuals of the Fringe. Three figures on a platform suspended above the stage. Two women in flesh coloured underwear lie supine. A man, dressed only in shorts, appears to stand on one woman’s head. He stares out at the audience, unsmiling, as they file in to take their seats.

This is an extraordinary concept from Circumference – circus on a platform suspended several metres above the ground. The platform is suspended at each corner, so as the acrobats move, the platform pitches and spins. It is heart in your mouth stuff.

The audience are treated to a series of sequences, the elegant lyricism of the performers a seductive contrast to a succession of musical flourishes (Tuck Nelson and Jonny Leitch). Lit to caress the edges of the acrobats (Pablo Fernandez Baz), this is a visual feast. It’s circus, dance, acrobatics, visual theatre that all toys with the idea of trust. You’ll have seen some of these moves before – but you most likely haven’t seen them performed on a platform that lurches and tilts, apparently without warning, leaving your centre of gravity perpetually at sea.

There’s a curiously absorbing, astonishing rug pull. And saying any more than that would ruin it. Suffice to say that this is part of a new wave of circus that’s eager to make its voice heard as clearly as it might be in any other art form. It’s up to you to decide whether the performers earned that right.