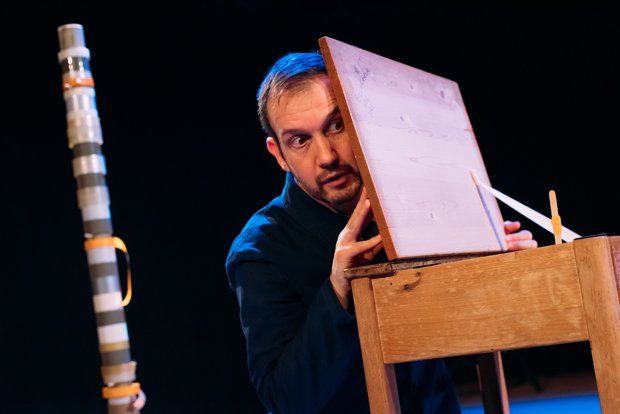 the stuff of innocent imagination

Charming, delightful, inventive. These are the words that come to mind on watching Stick by Me, a dance show for 3 – 6 year olds created by Ian Cameron and Andy Manley who previously came up with White which won a Fringe First and other accolades in 2010.

One man-child is dressed in a neat blue jacket with his shirt buttoned right up to the throat. He sits in the middle of a pale blue dance lino, the edges of which delineate his space and out of which he is not allowed to step (very cleverly done – you’ll have to see the show to find out how!)

In his playroom, he has minimal props: a school table and a chair from the infant’s classroom, countless rolls of tape, a cardboard box and an orb of see-through plastic. Like all youngsters he can create fantasies from the simplest things, using what he finds around him, and mostly that’s wooden lolly sticks. Inventive and unpredictable, the stories he plays with them and they with him are the stuff of innocent imagination.

The soundtrack is immensely important – directing our feelings, giving voice to the sticks, moving us through myriad emotions. The easy piano and percussion, the electronic soundscape of kisses and farts is an intrinsic part of the show, like his mind-music, like a non-verbal version of himself.

Initially, Andy Manley utilises mime and facial expression in particular, with subtle, simple movements of a single finger. As the show progresses, he fills the stage with modest movement: guileless walking, unsophisticated running. He is agile, not by any means looking like a traditional dancer, always focused, embodying the kid within. On and off the chair he climbs, corner to corner he capers until, close to the end, he dances a smooth solo, looping and folding, light in his centre, a gentle sort of joy.

The audience is with him throughout, experiencing his disappointments, buoyed up with his exaltation, relishing his discoveries, and when he exits we are sad to see him go and we want him to come back so we can keep on playing together.