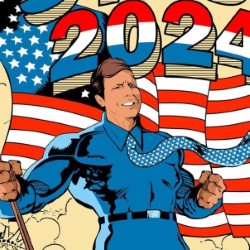 Sylus 2024! takes the form of a political rally. Our slightly JFK-sounding candidate, adorned in outlandish USA flag suit hands out badges and greets us individually. He then launches into his campaign pledges, telling us everything we’d like to hear – no student debt, healthcare reform etc. – but occasionally slipping up with some well-constructed un-PC quips that might well remind us of some real-life politicians.

After this initial greeting, Sylus exits the stage and returns to his ‘dressing room’ where we are privy to his behind-the-scenes thoughts. After talking to Nessie, his childhood sock puppet – yes – he reconsiders his speech and wonders if maybe it wasn’t so effective. At this point, a new element of the show is introduced – improv. Embarking on some audience participation, performer Jeff Ahern asks for suggestions which are then absorbed into a motivational allegory he creates after returning to the podium.

The format of the show continues in this way – alternating between public speeches and backstage doubt. Again, Sylus’s campaign promises evolve and develop around audience input and Ahern is excellent at this – playing with our feedback and making off-the-cuff witty jokes. It’s a small crowd today, though, and the performer has to work hard to keep the energy up. Occasionally his volume slips, and although the intention is to create a serious air of focus, it does become quite difficult to hear him.

By the finale, it is clear where events are headed and the closing visual metaphor is interesting if a little simplistic. It also alters the tone of the show a touch too much from parody to dark cynicism. As a satire of modern politics, Sylus 2024! is effective and Ahern is a talented improv performer. However, it feels like there could be even more to explore.