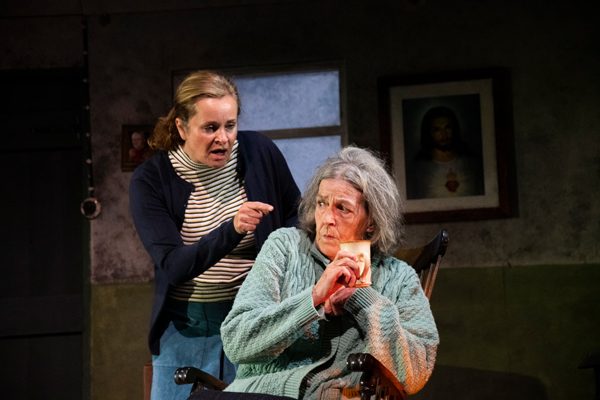 The Beauty Queen of Leenane

Rapture Theatre deliver a mesmerising portrayal of a dysfunctional family

Writer Martin McDonagh’s range of credits is nothing short of impressive, including the likes of Three Billboards Outside Ebbing, Missouri and In Bruges, make it especially exciting to have Rapture Theatre perform his 1996 play The Beauty Queen of Leenane at Eden Court. The set is reminiscent of an earlier era, dark, untidy and full of Irish tropes: the rain, the picture of Christ of the Bleeding heart and the rundown kitchen.

McDonagh’s writing defies easy definition, as does The Beauty Queen of Leenane. This is a tragedy but mixed throughout with moments of comedy. The action itself encircles the enmeshed relationship between a mother and daughter – a relationship fraught with anger and frustration but, in many ways, is so relatable.

We are in an isolated community where every slight is remembered. The young Ray Dooley (Ian O’Reilly) is still furious that his swing ball was confiscated by Maureen years before, and he builds up a violent rage remembering this injustice – this irrational irritation is one of the many causes of laughter. Notably though, O’Reilly’s baseball cap and joggers costume remind us that, despite appearances, we are at the end of the twentieth century.

The manipulative mother Mag is beautifully portrayed by Nuala Walsh, constantly rocking back and forth in her chair. Julie Hale’s long-suffering Maureen, demands our sympathy as she rails against her imprisonment and the torment she endures from her parent. The petty tortures these two women inflict on each other are recognisable as part of many, too familiar, dysfunctional relationships and they build to a crescendo until laughter turns to horror.

The only character who doesn’t display pent-up fury is Pato, skilfully played by Paul Carroll. His monologue opening the second act breathes sensitivity and understanding into an explosive situation. He offers sanity and even an escape from the loneliness, and through it we learn about the isolation of earning a living in a hostile, foreign country with no one willing to befriend him. We are shown the prejudice that greets the Irish as they travel, mainly to England and America. Maureen experienced similar treatment during her time in Leeds, where she remained as alone abroad as in the secluded village of Leenane.

The rocking chair and the swing ball seem to be metaphors for the constantly moving population of Ireland as they leave and return but never seem to progress. Unfortunately, the abusive relationships presented in The Beauty Queen of Leenane are not confined to the Irish but are undoubtedly universal. However, it is through an incredibly talented group of casts and creatives that these issues are portrayed with such deftness.