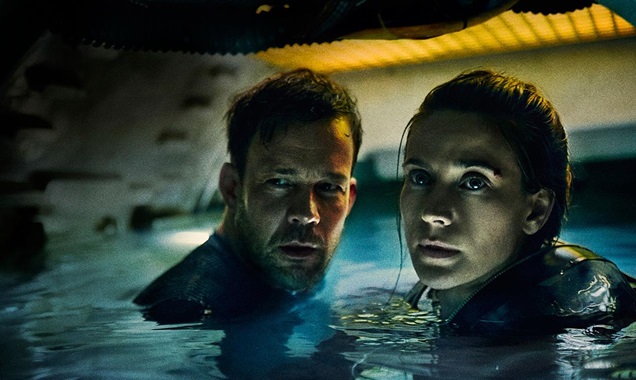 The Chamber enters a new mini-genre of underwater-claustrophobia thrillers joining others like Sanctum (2011) and Black Sea (2014).

The setup is established swiftly. Four central characters – all distinctly drawn, from unreasonably aggressive Parks (James McArdle) to erudite Denholm (Elliot Levey) – are teamed together in a miniature submarine, sorely in need of refurbishment. The McGuffin: data from a sunken aircraft near North Korea’s coast. Conflict arrives, though, as one member of the crew, Mats (Johannes Kuhnke), isn’t in on the real scheme, only discovering the truth after the sub has been commandeered by the others, 300 metres deep under the Pacific.

On a relatively low-budget, the filmmakers have created a convincing and effective set that manages to lock the audience as well as the characters in. Tight camerawork and James Dean Bradfield’s (Manic Street Preachers) taut score help amp up the suspense and sense of imprisonment, while the four key actors are engaging in their portrayal of mental deterioration. The near-absence of exterior shots of the sub also contribute towards feelings of confinement and help us zone in on the characters’ perspective.

Some aspects of the script, however, are less successful in creating believable tension. Fairly early on, members of the crew are already aggravated with one another with no real provocation and various decisions throughout seem questionable – like boarding the well-outdated craft in the first place, Mats even telling the others before they descend that a hard kick could rupture the thing. The climactic final twenty minutes do make the patchy build-up worth the ride, though, with the film veering into effective horror territory at its crescendo.

The Chamber is a fine debut feature from Ben Parker and, if you’re willing to forgive some eyebrow-raising plot points, is worth the short 85-minute running time.