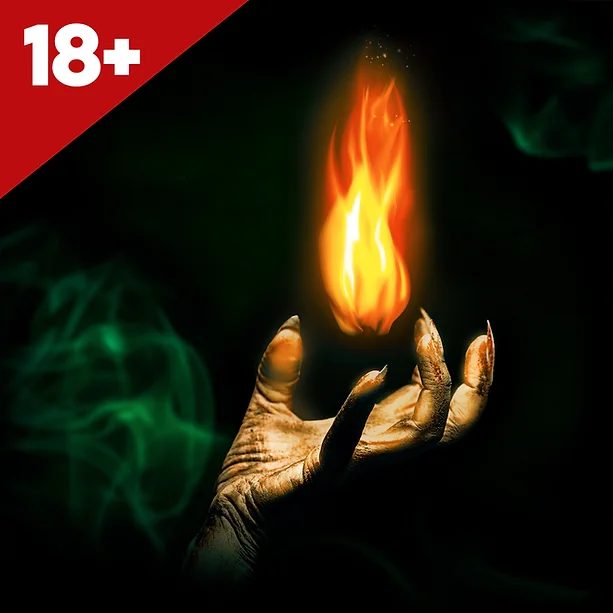 Does what all good storytellers should do

By the time the curtain closes on The Crooked Path, you will be left with little doubt of just how much Inés Álvarez Villa loves telling stories. Smiling, she meanders around the stage like a lost soul, often imitating the states of her characters. A shining spider clutches the fabric around her neck as if she is the mother of a brood, dressed up in a suitable cocktail of haggard elegance. In her debut solo show, Villa does what all good storytellers should do; conjure something out of seemingly nothing.

Villa treats the respectably sized crowd at the Edinburgh Horror Festival to three distinct but related stories of incantation, magic, and doom (focused broadly on farming, writing, and future technology). All hold your interest in different ways, although it is the second story – a fatal story of manipulation and writer’s block fit for the modern age – that proves the most memorable. The finale meanwhile casts its eye over a potential future, and features an entertaining parody of ‘chief twit’ Elon Musk – the allusions to who are obvious but it still proves funny when she essentially namedrops him.

All three stories share broad characteristics including the apparent summoning of something from next to nothing, or finding light in the forest of situations only for the flames of hope to be snuffed out. They are more fascinating than downright horrifying, but such is the gentle zeal that Villa has for storytelling that you will listen all the same. A few misspoken words are quickly brushed aside under the spell of her prose, with a disarming presence that sits comfortably alongside her macabre guise.

The cinema room in Banshee Labyrinth proves to be the perfect setting for some picturesque tales that are a grand start to Halloween. Villa will make you think twice the next time you want to grow some crops, write a book, or amaze the world with a new clean energy source. This may be the arrival of a performer still finding their feet, but she clearly has much to offer.

The Crooked Path is showing as part of the 2022 Edinburgh Horror Festival until 30 October.