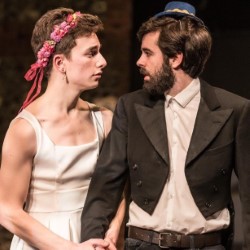 Enjoyable, if not inconsistent, debut from Milk and Blood

The Dip is Milk and Blood’s debut show. It features two men, Al and Nick – played by William Patrick Harrison and Max Young, respectively – who are trying to navigate their relationship as the world they know dissolves around them. Al is forced to go on a quest to find Nick and profess his love for him, meeting a host of oddball characters on the way. These range from homophobic police fish to members of a sinister “system” who are determined to marry Al off to one of the only three bachelorettes in their village, called Nicole (who also looks suspiciously similar to Nick). It’s a fun psychedelic trip through Al’s head, and it doesn’t take itself too seriously – there are lots of puns and visual gags, as well as a pleasing level of audience participation that adds to the performance without becoming exhausting (for either party). There are good musical numbers, a very talented live band, and some off-the-wall humour which hits just the right notes.

Unfortunately, the show is not without its issues. The main problem is that it’s inconsistent: there are good ideas there, but they’re either used too sparsely or too often, which messes with the pacing of the performance. Some scenes go on for too long and begin to drag, especially when a lot of them just feel like a competition of who can yell louder. Other scenes, such as the one that opens the performance, don’t go on for long enough and don’t give the audience enough time to develop a connection with the main characters (this is especially frustrating because it means that the entire show is centred around a relationship which we’re not sufficiently invested in).

These feel somewhat like teething problems, though – to be clear, a lot of it really is very enjoyable. Harrison and Young have excellent chemistry and, despite the lack of meaningful time spent together as Al and Nick, capitalise on every moment they do have together in a thoroughly entertaining and touching manner. As the play progresses, very salient points are raised about toxic masculinity and a darker subtext about gay conversion therapy. All in all, The Dip is a witty production which throws plenty of amusing curveballs at the audience – it’s just a shame that we can’t catch all of them.