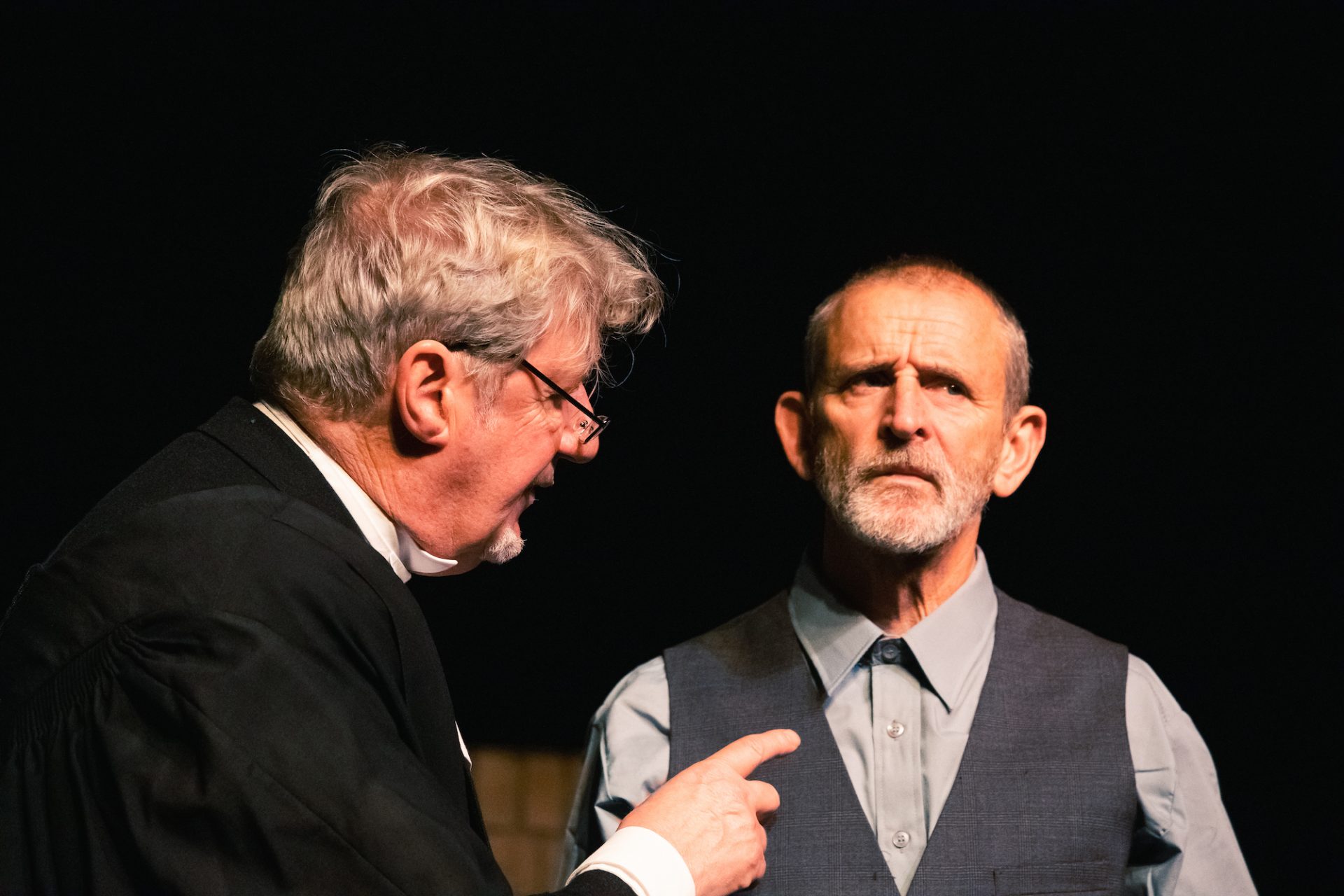 First off – how wonderful to sit once more amongst (albeit masked) fellow theatre goers. Secondly, what a stroke of genius on Rapture Theatre‘s part to revive lunchtime theatre in a country where darkness falls mid-afternoon and rain lashes down night after night. Finally, the company’s choice of John Mortimer‘s comedic script, which makes light of being trapped and offers a hopeful ending, is surely just the tonic a pandemic-weary audience will appreciate. Judging by the steady stream of attendees filing into the padded seats of Eden Court’s OneTouch Theatre, the makers of The Dock Brief, directed by Lyn McAndrew, have hit on a winning formula.

The stage is dimly lit, with white noise and birdsong the sound-backdrop for the arriving audience. The setting is a prison cell, designed by Frances Collier to replicate the exact size and furnishings of a prison cell in 1958 – a time when the punishment for murder was hanging.

The stakes are high from the start: hapless and likeable budgie-fancier, Herbert Fowle, is on trial for murdering his too-cheerful wife. Elderly and incompetent, Morgenhall is his court-assigned barrister. Much of the most effective comedy rests on the dynamic between the two, with a genuinely witty, almost flawless script, which takes flight in the hands of two experienced and talented actors.

John Bett of Para-Handy fame – who was also a founding member of the seminal 7:84 theatre company, which brought us The Cheviot, the Stag and the Black, Black Oil – embodies the self-pitying, self-consciously posh and pompous Morgenhall while also alluding subtly to the insecurities within. Glyn Pritchard provides a welcome contrast with his fidgeting and naïve portrayal of the accused, but also has opportunity to show his versatility during some play-within-a play diversions, much to the delight of the guffawing audience. Sparse props are used to great effect, including a bible and a pen, and lighting is minimal apart from a constant projection of a barred window, symbolising both men’s entrapment. The humour ranges from puns and satire to farce and dramatic irony, but the audience instinctively finds something to love in both failed characters who triumph in their defeat.

It would be churlish to seek fault – there is perhaps a section at the end where the big reveal is delayed and delayed like the result of a TV talent show, and where more pace and a reduced script would have perhaps delivered the punchline more effectively; and yes, at times the moving of furniture may have been a little excessive. But wonderful lines like ‘I’m an old man. I’m manured in disappointment’ more than make up for these insignificant quibbles.

Rapture Theatre’s The Dock Brief is a delight from start to finish. I’ll convince any jury of that.