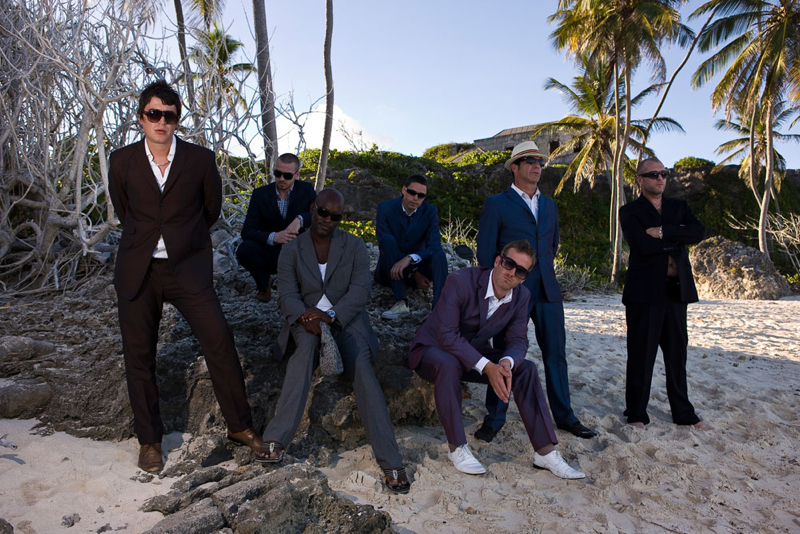 Fantastic passion and energy compensates for lack of numbers

A burst of euphoric vitality

It is savagely empty at 8.45pm in the Lemon Tree on a Friday night, and in the middle of this cold, vast tumbleweed expanse Barry Ashworth of the Dub Pistols, silver chain around his neck and exuding charisma, is rightfully disappointed at the shitty turn out (so far).

A split second of eye-contact and he approaches me with the kind of crazed purpose suited to a murderous dictator, clearly up for a sesh and jabbering on about the lack of people. He then declares (in much stronger terms) that actually, you know what, who cares, he’s smashed and let’s just ‘ave it.

His enthusiasm has a ripple effect and it is difficult not to repeat his sentiments in the puddle of my own mind (in his customary English accent of course) as he lifts his sunglasses conspicuously atop the bridge of his nose, slow motion Reservoir Dogs style, to conduct a selfie with a group of friends.

Thankfully, there is a surge of latecomers and the venue fills to a respectable amount before the Dub Pistols grace the stage, immediately assuming a presence.

To a backdrop of soaring brass and bouncy dub/reggae influenced rhythms, it quickly becomes apparent that this is a band that thrives off crowd participation, and so it is a testament to their unwavering passion and energy that they manage to extract a lively atmosphere from the scraps of people.

Ashworth frequently takes a stroll through the crowd, connecting with and riling up as many people as possible; like a shot of pure diamorphine, he injects a burst of euphoric vitality into whoever is willing to receive it. And then like a long lost friend he hugs me before heading back to the stage, the walls of formality toppled over before they even had a chance to form.

Oddly, the music takes a backseat for this gig. Despite what musicians will have you believe, it’s not all about the music, man. Sometimes it is about an understanding: a collective decision to stop giving a shit about everything all at once to a simple beat, a nice melody and a couple lyrics chucked in.

Throughout the gig and especially towards the end Ashworth, beer perpetually in hand, makes calls to the crowd to find him an afterparty; he is not done for the night, and he is by far the most energetic, animated, and up-for-it of anybody in the entire building. Despite having more than two decades on me, he has the uncanny ability of making me feel much older.

You get the sense when they finish that this is obviously not the Dub Pistols at their best, but you have to commend them for the effort they put in and for loving what they do. Had they been playing at a sunny festival with a few thousand more people in the crowd, and everybody was up several more notches of intoxication, they are the type of band that could easily produce something quite special; however, on this occasion, more due to circumstances outwith their control, they have to remain on the precipice of brilliance rather than immersed fully in it.