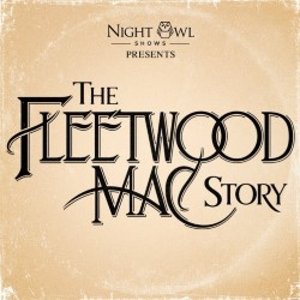 Night Owl Productions has a winning formula presenting ground-breaking and informative productions about the lives of some of the most influential singer-songwriters and music genres and this brand new offering The Fleetwood Mac Story, one of 10 shows they are putting on at this year’s Fringe, is no different.

With nothing more than a large screen projecting the title of the show, written in the familiar font of Fleetwood Mac’s Rumours album, the band doesn’t necessarily seek to emulate the make-up of the various singers that have graced the line-ups over the years.

Instead, these seven talented musicians – Hannah Richards on main vocals, Maia Elsey on vocals, Alex Beharrel on guitars and vocals, Harry Whitty on keyboards, James Morgan on drums, Noah Nelson on bass, Roberto Picazo on lead guitar – sing their hearts out for 50 minutes. It’s pure nostalgic joy, seat-bopping, and foot-tapping fun, which has the audience lip-syncing along with the words.

For a band whose music has stood the test of time (55 years and counting), the Fleetwood Mac Story takes the audience through different eras and albums, with nothing more than song, interspersed with factoids such as the band had 18 different line-ups over the years.

It starts in 1967 when the band was f0rmed by Peter Green with a strong rendition of Black Magic Woman to the soulful guitar-based instrumental Albatross (1968) to Here You Go Again, Go Your Own Way, Don’t Stop, from Rumours (1977) an album that nearly didn’t make it out of the studio as it was so expensive to make, to Tusk (1979), an album we learn was critically successful but less so commercially. James Morgan excels on percussion here, showing off his competent drumming skills. The show ends with a high-energy rendition of The Chain, again from the Rumours album, building to a fantastic crescendo that leaves the audience wanting more and earns a standing ovation. Richards on lead female vocals is captivating (her rendition of Songbird is as beautiful as Christine McVie’s version), and harmonises beautifully with Elsey, the other female vocal, while Beharrel on guitar and lead male vocals has an enthusiastic vibrancy to his performance.

Beautifully conceived, and hugely nostalgic, this is a stand-out music show, as good as any other Fleetwood Mac tribute band I have seen, and will leave you hungry for more.