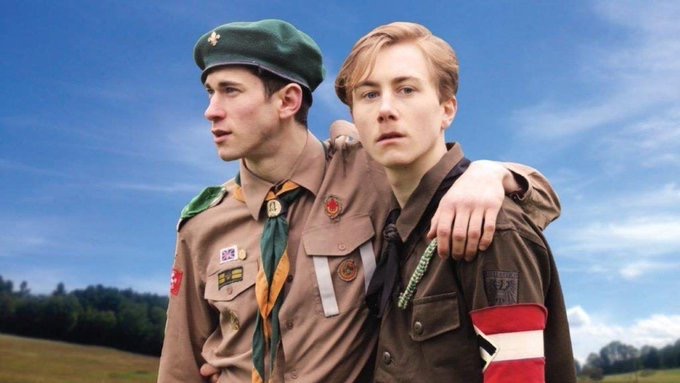 Glenn Chandler’s latest Fringe offering explores the near-forgotten history of the 1938 visit of the Hitler Youth, which was organised by Baden-Powell’s scout movement. In The Good Scout, the visit creates an excited mood of curiosity in sleepy Cambridgeshire amongst diligent and eager scouts, Will Parrish and Jacob.

As Will (Clement Charles) and Jacob (Charlie MacKay) gain more knowledge about the Reich their attitudes to their visitors changes. Jacob longs for experimentation with the powerful Gerhard (Clemente Lohr) whilst Will evokes the era’s cruel attitude to gay sexuality by failing to understand Jacob’s growing frustration.

Lohr’s strident portrayal of Gerhard exemplifies the most aggressive and potent aspects of Nazi ideology whilst Simon Stache provides layers of torment as a conflicted and fearful young German who is anticipating the polarising devastation of the future.

Efficient direction makes excellent use of the ample space and the many props add colour and realism to the piece.  The costuming by David Shields is detailed and faithful to the era, which is not something that can be taken for granted. This is particularly evident in the Whitehall formality of John Dory played by Lewis Allock who may or may not be the military intelligence man to solve everyone’s problems.

Factual interludes serve to provide historical context to proceedings and some of these are very enjoyable  allowing some of the cast to stretch from naturalism to high camp.  Structure does provide a small problem, however, as the last act feels under-cooked and fails to deliver a satisfyingly detailed explanation of the intelligence angle of the plot. Although this leaves some in the audience openly questioning what has transpired, this is another enjoyable and professional work from Boys of the Empire Productions.