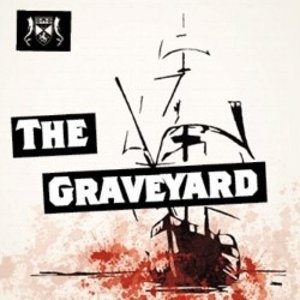 How did two men come to be stranded at the end of the world, and how do they reconcile their desire to live with what they have had to do to survive?

The 1629 sinking of the Batavia, and the descent into murder and rape that followed is one of the most horrifying in maritime history. When rescue came most of the mutineers were hung but two sailors, who were deemed to be less guilty than the rest, were spared the noose and marooned in Australia instead. We know nothing of their fate after this, but through darkly comic scenes this piece explores what may have been.

From the music playing as the audience enters – 25 Minutes To Go by Johnny Cash – it is apparent this is going to be a play full of gallows humour and unfortunate fates. Indeed, we begin at the end with Hans bound and fearing for his life. The play’s vignettes skip around the timeline, slowly revealing more of the story. For those familiar with the history, there are nods to abandoning men on the premise of finding water, the power-grab and death of the discredited apothecary Jeronimus, and to the mass murders he ordered. But this is never the main thread, with the focus on these two unknown sailors trying to survive.

The decision to skip backwards and forwards in time makes for an interesting reveal of the events especially for those unfamiliar with them, and highlights the descent into madness of the two men. However, with the minimal props and no scenery it was not always entirely clear or obvious where and when scenes occurred making it in places difficult to follow and piece together the story.

The two, very different characters – one fretful, anxious to try and survive but still bound by a moral compass, the other able to accept the cost of his survival – are very well played. Despite the terrible things they both do, the audience remains sympathetic and invested in these men’s fate. Playing out with the main horror largely off-stage is an interesting way to highlight the moral dilemmas and questions. For the most part it works very well, although the depiction of the Aboriginal people is very shallow and borderline offensive.

A very interesting idea, this piece is well performed and forces the audience to confront the place and weight of morals when civilisation is the other side of the world, while still having a keen comic sense.