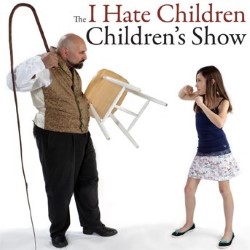 The I Hate Children Children's Show

“If the trick doesn’t work, one of the children will die.” Such is the ominous (but hilarious) warning awaiting the audience of the I Hate Children Children’s Show, which has latterly become a regular and hugely popular fixture at the Fringe. Californian magician Paul Nathan commands the stage from start to finish with his booming voice and pretend king-of-mean persona.

As is made clear early on, kids are the stars of this show, and full marks go to Nathan for making sure every child has the opportunity to be part of a magic trick. These are fairly traditional sleight-of-hand illusions and include, amongst others, ribbons that remarkably reattach, disappearing hankies and invisible ink. The old favourites are usually the best, and these classics allow everyone a chance to participate.

Whilst parents sup on a mouthful of free prosecco (yes, FREE prosecco), Nathan gets to work like a circus ringmaster poking fun at his charges, much to the amusement of the adults. He soon has children running in all directions, seemingly unaware that they are pawns in his comedy.  With a bark that is definitely worse than his bite, Nathan’s pretend insults are perfectly pitched and as the show progresses, the children get ever bolder, with most heading for their two minutes of fame with alacrity.

Nathan is a born comedian and often has parents laughing as hard, if not harder, than their children, who miss some of the humour sailing over their heads.  The patter is very slick but also personalised and Nathan ensures all are included – even those too shy to leave their seats. Guitarist John Anaya adds dramatic effect by providing appropriate background music throughout. An end-of-show sweet and the chance to buy your own magic tricks completes an uproarious hour, with all guaranteed to leave with a smile on their face.