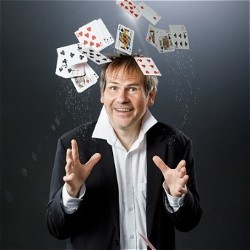 The Magic Of Jim

‘Jim the Magician’ – full name Jim Campbell – is a familiar figure at the Pleasance, moving from table to table in the courtyard bars performing close-up tricks for Fringe-goers. This year, as he puts it, ‘they’ve let him indoors’, with his own prime-time slot in the official programme. It’s only a half-hour show, but it packs in an impressive series of illusions – and a couple of genuine life lessons, too.

We start with a quick run-down of Jim’s professional life story, which is pleasantly self-effacing yet inspiring at the same time. As a busking magician – someone who shows tricks in exchange for tips – he’s worked his way up from walking along queues, to illicitly approaching tables, to being blessed by Pleasance management as their official conjurer. ‘Magic is all about practice and repetition,’ he tells us, and you can sense the joy when that hard work pays off – the first time he earns a tip for an illusion, or the validating moment when the Pleasance takes him on.

Quite rightly though, the bulk of the show is given over to magic, and Jim proves to have a formidably varied repertoire. Starting with a find-the-card illusion which packs in a huge variety of reveals, he progresses through homages to influences as diverse as Derren Brown and Uri Geller – all delivered with great good humour, and with gentle treatment of his audience volunteers. My favourite trick of all comes near the end, as he wittily ‘fails’ to solve a Rubik’s cube before revealing a clever pay-off; there’s a life-affirming message sitting behind that one, a truth about accepting ourselves and others which we’d all do well to remember.

The patter’s a tiny bit stilted at first, and the show overall takes a moment to get going, but once he’s in his stride Jim has an easy rapport with the crowd. There was plenty of laughter on the day I attended, and a good few gasps of astonishment as well – including, I admit, a couple from me. I’ve seen a lot of magic at the Fringe, but there were tricks here I’ve never seen before and surprises I didn’t spot coming.

This is a tale about believing in yourself, and becoming the best at whatever you do – but more than that, it’a an enjoyable and pleasantly confounding magic show. Here’s hoping the Pleasance put Jim on stage every year.