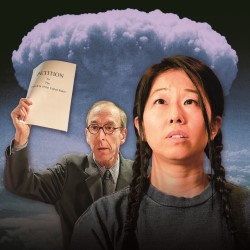 Presents the heart-rending tale with forensic attention and gentle compassion

On 6 August 1945, three months after Germany had surrendered in the Second World War, an American plane dropped an atomic bomb on Hiroshima. Three days later, a second plane dropped a second bomb on Nagasaki.

The Mistake relentlessly charts the events that led up to this day. The boy who was always destined to be a scientist, Leo Szilard, who first discovered the sinister potential of Uranium 253. His flight to America from Berlin, the 1920s physics capital of the world as Hitler’s grip tightened on Germany. His elation when President Roosevelt consents to support his race to perfect the chain reaction to prevent Germany using Szilard’s own technology against them. And then his sickening, dawning realisation about the consequences of his discovery.

Szilard’s story is woven together with the chain of events that led General Paul Tibbets to fly the plane that dropped the bomb. And the experiences of Nomura Shigeko (Emiko Ishii), a young woman living in Hiroshima at the time. Through her eyes, writer Michael Mears is able to chart the gruesome aftermath: the horrific consequences for those caught up in the blast, related in harrowing detail at both a population-wide and a personal level. And the clinical curiosity of many of those involved about the fate of the hundreds of thousands of people living in these two unlucky cities.

This is masterful, devastating story-telling. Mears’ message is clear: this is a calamitous event that cannot be allowed to happen again. But the construction of the narrative artfully highlights how many people were involved in the so-called mistake and how few could truly be considered to be blameless. Mears and Ishii are unsentimental performers: it would be easy to wallow in the misery of this story but they let much of the horror speak for itself. And director Rosamunde Hutt presents the heart-rending tale with forensic attention and gentle compassion.

‘This should be on television,’ declaimed a lady in the audience at the close of their last Fringe show. ‘Everyone should have to see this.’ Just so.