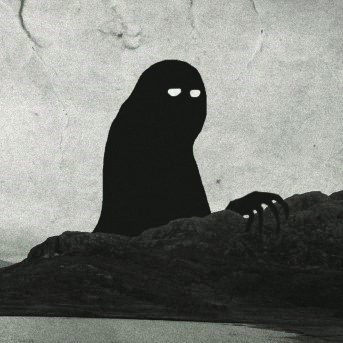 Exciting and interesting visual theatre with animation and illustration.

Using a variety of media in performance can be a tricky procedure and requires precision, attention and choreography. The North! The North! is a solo show from Christopher Harrison and uses projected animation, illustration, puppetry and object manipulation to tell a fantasy story about a divided England. This media combines with the inventive set design to present an exciting visual theatre experience.

The story focuses on our protagonist as he makes his way through an imagined England where a physical divide has torn the north and the south of the country apart. During the journey Harrison embodies a variety of characters who offer assistance and also present obstacles for the character. The story is a basic heroes journey where good must triumph over evil, but The North! The North! is not a typical theatre production and it has many tricks up its sleeve. The show really shines when the performer interacts with scenery and props. A desk is situated on the stage and Christopher manipulates the drawers and the table top to act as screen for the animation and illustrations to be projected on. The effect is charming and endearing and keeps the audience guessing on how the performer will continue to utilise the set design. There are also two loose hanging screens to the back of the stage. These are employed to receive projected images such as tower blocks, mobile phones and other items and objects that our protagonists meets as he makes the treacherous journey north.

The North! The North! relies on Christopher undertaking the persona of different characters and the performance is at times exhausting. He darts around the stage and makes full use of the performance space. On occasion these characters are presented as shadow puppetry and also through object manipulation, but with two screens available to the back of the stage and with the performer showcasing his ability in illustration, it would have been nice to have seen these characters as menacing projections who stalk the character and add to his torment. The technique of projecting the animation on various props and screens is very much what makes the show stand out and presents The North! The North! as an engaging piece of theatre.