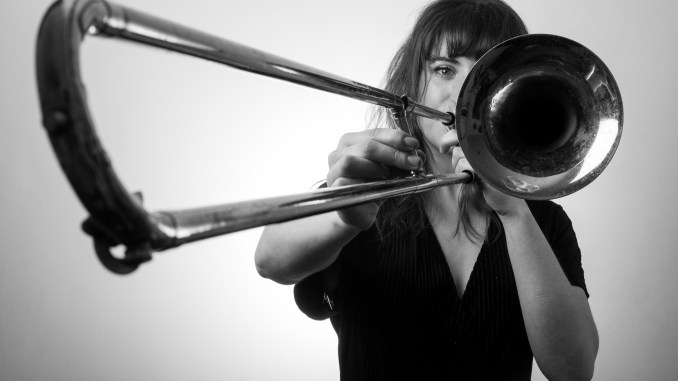 The Problem With Faye Treacy

Trombone-playing comedian goes too heavy on the autobiography

As a BRIT School contemporary of Jessie J and Adele, Faye Treacy has the multi-faceted performing arts background for a gig like this. Unfortunately, she doesn’t have the profile of her schoolmates, and this autobiographical hour, which assumes audiences will have a lot more connection with the specifics of a stranger’s life than is actually the case, suffers because of it.

Treacy’s a trombonist and uses it to rally the audience to welcome her on stage with The Lion Sleeps Tonight. It’s a lively opener and sets us up well. Then she gives us the first of many personal details about her life. We learn she was a premature baby with developmental concerns, we learn she has bipolar disorder, we learn about her parents’ divorce, about her foster siblings, about one particular foster sibling she was very close to who had a mental age of eighteen months.

There’s not much comedy here. There’s some jokey lines, but they almost feel like afterthoughts. The priority seems to be conveying the detail of her life, not using it to make us laugh. Were this a celeb’s misery memoir, with some funny asides, it would be fine. But we don’t know Faye Treacy, and nothing here resonates, either as the backstory of someone we’ve built a rapport with, or as something universal we can relate to. It’s too specific, and too self-centred for this setting. It feels like someone over-sharing their life story down the pub.

Which is a shame, because when Treacy’s not doing that, there’s some good moments. The trombone’s a great and unusual comedy tool. At one point she gives us her musical assessment of the contents of Donald Trump’s head – all sitcom themes and patriotic anthems. It’s an original and hard-to-nick idea. Then she crafts her own instrument out of veg for a very nice finale.

All too often though it reverts to naked autobiography. She was in the National Youth Jazz Orchestra, another specific setting that distances us, but there’s the makings of a decent routine about her dalliance with the alpha male of the group, the first trumpet. But alongside a funny story about him being accidentally drugged before he gets up to perform, she stretches for an unconvincing abuse angle, which isn’t built up to be weighty enough to shock or to add sufficient schadenfreude to the drugging incident. Besides, the disdain with which she refers to the bass trombonists as “Northern fucks” who fart a lot – it might go down well in Croydon, but not here – doesn’t make her the most sympathetic figure.

And when we get the sad end to the story about her foster sibling, it also feels more about her than her sibling. That’s the wrong look in what could be a heart-tugging moment of the hour.

The comedy trombonist angle is distinctive and workable, so it’s a puzzle as to why she’s gone so heavy on the storytelling, especially when it’s so transparently wanting to hit all the sad notes. Tragedy plus time can equal comedy, but that’s not an automatic thing. You still have to do something to turn it into comedy, and this doesn’t do nearly enough.