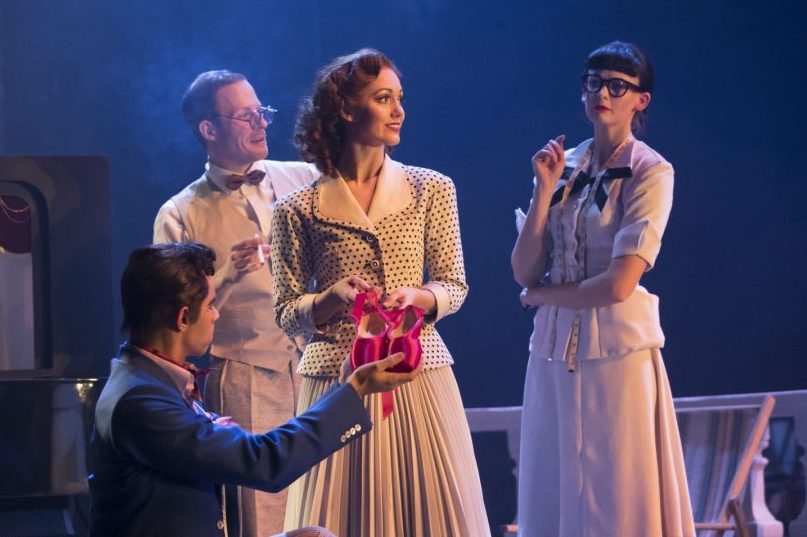 Matthew Bourne’s ballet/dance dramas never disappoint. Even his confused Play Without Words (2002) – a retelling of Joseph Losey’s movie The Servant – had such invention it could make a balletomane out of a 110 kilo trucker.

The source this time is one of the most glorious British movies ever made. In 1948 the celebrated Powell and Pressburger cast Moira Shearer as the compulsive, redheaded ballerina who, in a Technicolor fairytale role (there’s a ballet-within-the-ballet where the girl is bewitched by her ballet shoes) and in real life, is tragically bewitched by her passion for dance and equally torn between the composer she loves and the impresario who can make her a star. As much as anything The Red Shoes is about the creative imperative. It’s lyrical – almost magic realist – with a “secret” gay subtext (the original was based on Diaghilev and Nijinsky’s battle between the professional and the sexual) and perfect fodder for Bourne, the man whose “all male Swan Lake” was groundbreaking and has become a modern classic.

The choice of Bernard Herrmann for the music is inspired. Alfred Hitchcock’s in-house composer was equally at home with romantic symphonic music and eerie pieces composed to highlight the action. Sensibly, Bourne has not copied the look and feel of the film, which was a huge influence on a generation of dancers. Ashley Shaw is marvellous as Victoria Page trying desperately to balance things with her producer Lermontov (the imperious and commanding Sam Archer) and the love of her life Julian (an agile and elf-like Dominic North).

Bourne effectively captures the magic of theatre – the performance, the waiting in the wings, the understudy who goes out a youngster and comes back a star. He also pokes gentle fun at assorted dance styles, from Martha Graham to the sainted Diaghilev and even Wilson and Keppel’s Egyptian sand dance. The revolving proscenium arch device of the set is from the outstanding Lez Brotherston and is as much a star as any of the dancers. For the ballet-within-the-ballet there is a stark white set, the dancers dressed in black save for Victoria’s red basque and those damned red shoes.

Back in 1948 the movie was a revelation for postwar Britain – it was high art and romance capturing the sun of the South of France and all shot in glorious Technicolor. And on stage there are cinematic references by the bucketload from the opening Vertigo shot to a sequence against a digital star cloth during which poor Victoria dances into eternity.

This is a thrilling evening, wonderfully imagined.