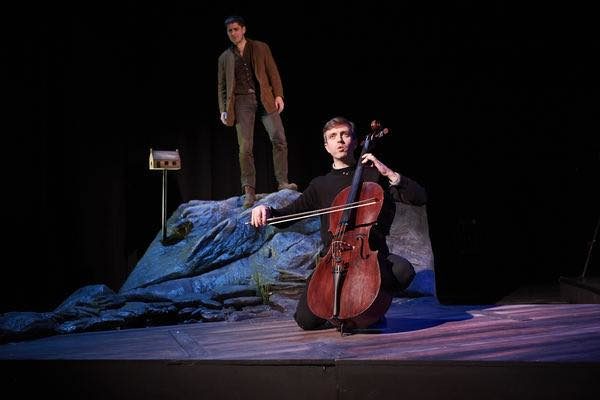 A captivating piece by West Lothian writer Ellie Stewart brings touring drama to the heart of Speyside. Commissioned by Eden Court, The Return is being performed at fourteen small scale venues providing an opportunity for local communities to enjoy professional shows on their doorstep.

It’s based on a story of imposture. A French peasant of the 16th century in the Pyrenees returns to claim he was the husband of a wife he had left several years previously. After three years his identity is revealed, and he is executed.

Beginning with the man’s arrival at Bertrande’s farm in the hills, the performance evolves through developing relationships, revelations and memories so that the audience is constantly questioning the truth of his identity. Seen through the developing scenes between Bertrande and her son, at times you want it to be true. Then you see Bertrande as being duped by a charming hustler.

Emilie Patry conveys the strength and aloneness of Bertrande with brio, putting in a strong performance. Her interpretation of peasant songs brings an extra dimension to her character and she tackles the dance sequence by EJ Boyle with great attack. Thoren Ferguson is charming and believable as Martin. The ladies in the audience warm to him as he rips off his shirt. He has an easy charm and you understand how he manages to convince Bertrande of his identity. He engages the audience in exploring what truth is as seen through human relationships.

Greg Sinclair, both composer and performer has the difficult role of playing Bertrande’s son at two different ages. His voice and cello cut through the text admirably. The scene between him as a child with Martin at the water’s edge stands out. The evocative music composed and played by him on cello and Thoren Ferguson on violin completes the creation of this work. The violin Thoren Ferguson plays is the Wilfred Owen Violin made from a branch of the sycamore tree taken from Craiglockhart Hospital to commemorate Owen. Without the musical background, the interpretation and scope of the piece would be difficult to achieve so it was a wise choice made by experienced director Philip Howard.

This is the first time Eden Court have brought their tour to this admirable modern community centre and hopefully the trend will continue. More touring productions of this calibre are an important opportunity not just for audiences in small communities but for new writing and emerging actors to develop their skills.