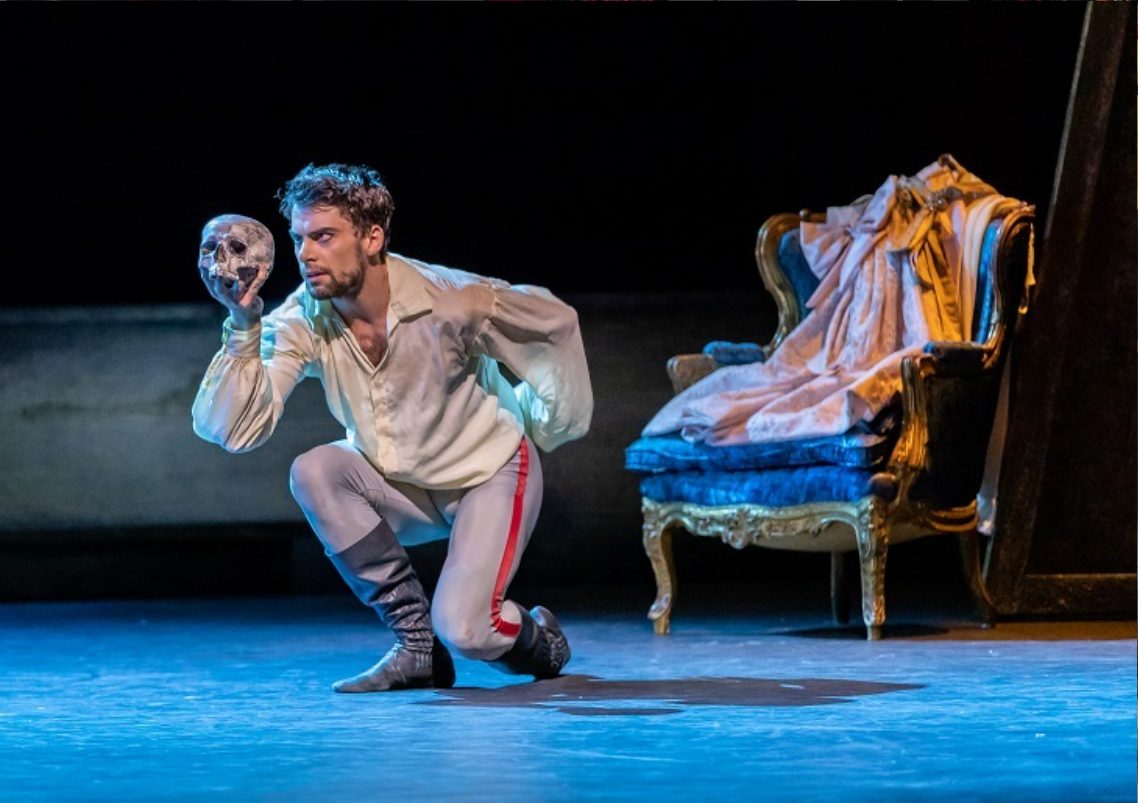 The Scandal at Mayerling

Visually arresting and emotionally tasking, Scottish Ballet‘s production of The Scandal at Mayerling brings a series of tragic events to life.

The curtain rises to a proscenium filled by a stone angel, head bowed, behind the scrim rain is falling, and we glimpse a funeral bereft of mourners. Soon we move to the ballroom of the Hofburg Palace with sumptuous costumes and elegant courtiers. However, this is no fairytale. Already there is friction surrounding the actions of the Crown Prince Rudolf, performed tonight by principal dancer Evan Loudon. The rumours of Prince Rudolf’s womanising and his dalliance with Hungarian nationalists are vividly portrayed through strong, brutal movements, which evolve into more violent, even abusive, gestures. There is some respite from such intensity in scenes featuring Aarón Venegas as Bratfisch, Rudolf’s driver, as he dances to distract Rudolf from his depression.

To escape his mental anguish, Rudolf flirts with suicide. He imposes this obsession on his fragile wife Stephanie, portrayed by Amy McEntee. He also tries to entice his long term mistress Mitzi, danced by Rishan Benjamin, but she rejects his suggestion of a death pact. However, another former mistress, Countess Larisch, presents him with a more willing accomplice – seventeen-year-old Mary Vetsera, performed by Claire Souet. In the role of Countess, Grace Paulley offers a powerful performance.

Is Mary willing to enter into a suicide pact or is she coerced by pressures from the Countess and Rudolf? It is a cruel story; the beginning of the end for the Hapsburg dynasty and a factor in the start of World War One. It’s a scandal which reached royalty and, despite being over a hundred years old, reverberates with echoes of the modern scandal surrounding Ghislaine Maxwell, Jeffrey Epstein, Prince Andrew, and Virginia Giuffre.

For a creative form which is so allied with grace and beauty, Kenneth Macmillan’s choreography shocks by being savage, even ugly. The effect is further heightened by Elin Steele’s set with its strong diagonal beams cutting across the stage and wood panelling seemingly soaked in blood. Steele also designed the striking costumes, from those of the imperial court to the brothel workers vying for attention in the tavern. The story, setting, and costume are all enhanced by the resplendent music of Franz Liszt, performed live by the Scottish Ballet Orchestra.

The Scandal at Mayerling is an extraordinary drama but not for the fainthearted. This is an all-encompassing experience and one you won’t easily forget.