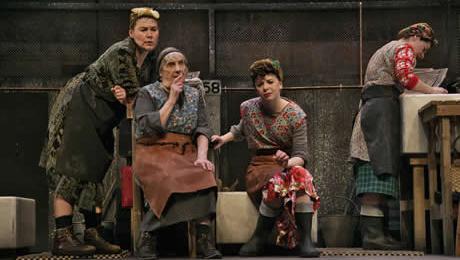 Glaswegian comedy The Steamie returns for a thirtieth anniversary tour of theatres around Scotland. The fact that it is only thirty years since the play’s debut may be surprising, partly due to the show’s early 1950s setting, but moreover because of its classic status in Scottish theatre and television. And with this status comes both expectation and perhaps a sense of weariness. However, this production exceeds the former and bulldozes the latter.

Unfolding in real time on Hogmanay in a Glasgow washhouse, the four unforgettable women – Dolly, Magrit, Doreen, and Mrs Culfeathers – give it elbow grease while chewing the fat before the end of the year. Writer Tony Roper returns to direct, bringing an authentic perspective to the wonderfully-realised characters and their charms. The actresses deliver every line with perfect comedic timing and interact with one another with a genuine sense of camaraderie, wit and love. Even the audience are tempted to join in during the infamous “Galloway’s mince” scene and the King’s Theatre is uproarious by the climax of Mrs. Culfeathers’ utterly daft but brilliant tale.

The women’s chatter isn’t just light-hearted fluff, though. The play brilliantly recreates the atmosphere of post-War Scotland and the impending societal changes, captured in Doreen’s fantasies of having her own telephone, bath, washing machine and television – and Mrs. Culfeathers’ dread of them. The show also, of course, illuminates the expectations and struggles of working class women at the time and both their acceptance and rejection of the roles handed to them. And there are one or two scenes that are moving on a much more personal level as we hone in on Mrs. Culfeathers’ and the heartbreaking reveal of her loneliness, looking after an ill husband and neglected by her two sons living in England – a distant very distant place to the elderly woman.

Particularly pleasing, and possibly surprising for those unfamiliar with the play, are the musical numbers. Isn’t It Wonderful To Be A Woman crystalises some of the key concerns of the show, while the jovial sing-along Pals captures the characters’ heart-warming bond and even has the audience on their feet during the finale.

The Steamie is a window into 1950s Glasgow that is both nostalgic and poignant and even for returning audience members, it doesn’t seem to have lost any of its magic. In fact, the strength of this production assures us that the show will undoubtedly be around for another thirty years. Probably even longer.