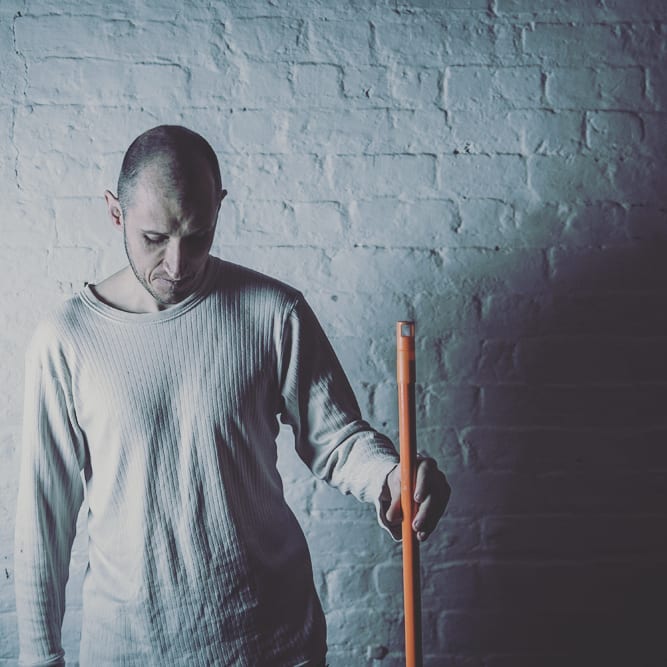 The Words are There

Powerful silent show about the devastating effects for domestic abuse

The Words are There is a solo show brought to the stage by Ronan Dempsey. It is also a silent show. But as the title suggests, the words do exist. The boy (played by Dempsey) meets the girl, Trish, and they plan to live happily ever after in Bettystown, by the sea. But all is not fine behind the scenes, the events get darker and darker, and eventually culminate in a powerful climax.

This show is highly innovative. The use of a mop as Trish – is genius, as it allows each member in the audience to picture her as they want. It is all irrelevant anyway, as her behaviour and her actions take centre stage. Dempsey is a phenomenal actor, his gaunt, haunted look and movements really bring the theme home. It is impossible to feel comfortable, as the dark truth of domestic violence unravels. The show does a great job of presenting a female perpetrator, without allowing ‘her’ to control the narrative. There is also balance in the writing between portraying the positive moments of the relationship but peppered with the negativity. This blurs the line and makes it very interesting to watch. The fact that the entire show is silent (although there’s recorded dialogue to aid understanding) but for the one line uttered out makes that one line searing.

The music is on loop. It sets out to achieve a sense of repetition of events amidst the drudgery of it all. But it is hard to tune out once the loop is heard and gets quite annoying. Also, it is not hard to guess what happens, though. About halfway through the script, the audience members will have probably figured out the ending. Not that it makes it any less impactful, though.

This is a powerful and poignant production about a topic less talked about. The anthropomorphisation of the mop is ingenious and very interesting. It adds a whole new dimension to the storytelling. A fine sample of Irish theatre!