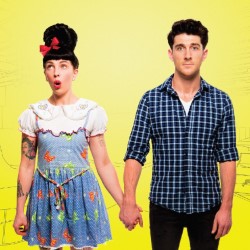 The Worst Little Warehouse in London

The Worst Little Warehouse in London is a high-energy cabaret extravaganza which will resonate with anyone who’s ever lived in shared accommodation and make those who live alone feel validated in their choice. Inspired by the real experiences of Australian couple Lala Barlow and Robbie Smith, the show follows the duo’s adventures as they arrive in London and try to embrace the new culture, while navigating a flatshare with every annoying archetype known to man.

The couple move into One Daisy Mill, a north-London warehouse repackaged as a bohemian living space. Barlow and Smith play all 12 inhabitants of the accommodation, morphing between characters with skill, all whilst singing, dancing and playing the keyboard in an exhausting looking performance. The show makes for a frenetic viewing experience with incredibly catchy and funny tunes to keep the audience entertained throughout.

The archetypal hipsters the couple share a home with – the yoga teacher, the activist, the space cadet, the beardy bloke and the fitness instructor – may be played broadly but we’ve all met these people. Some of us have even lived or worked with these people and that relatability makes the show so hilarious to watch. The minutiae of shared living including bathroom baskets, faecal explosions and passive-aggressive note exchanges are all exploited to comic effect during the fast-paced show.

One of the most impressive aspects of the cabaret is the way that the actors and director Sarah Redmond have managed to stage a visually stunning song-and-dance performance in a venue that is effectively a shipping container (the venue is not called The Box for nothing). The stage is small but every inch is used wisely with props in boxes, on a washing line behind the actors’ heads and scattered around the keyboard. At times the changing between characters and the use of props become farcical and manic but this only adds to the enjoyment of the performance.

The Worst Little Warehouse in London is a jubilant show which highlights the impressive singing and performance skills of Barlow and Smith, who take their musical theatre and life experience and turn it into an original, highly entertaining frenzy of a show.