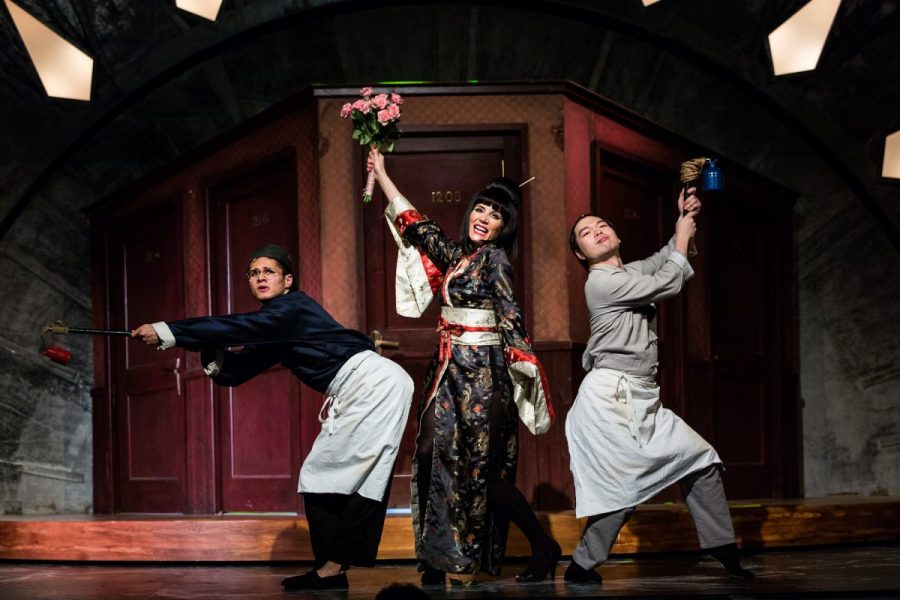 Frivolous and fun, this musical visit to the Jazz Age has its moments

Hardly anyone remembers Mary Tyler Moore who died last week. She was a huge TV star and TV producer (and feminist icon). It was Julie Andrews that was best remembered in 1967’s film musical Thoroughly Modern Millie, a movie once described by film critic Pauline Kael as “elephantine”. Back in the late 60s and way into the 70s there was a huge nostalgia for everything Jazz Age in TV, fashion, film and graphics. The distance between 1967 and 1927 is 40 years. Forty years distant from now is 1977 so the Roaring Twenties really does seem like ancient history. This was a time when a woman smoking or bobbing their hair was considered the most daring thing she could do.

Millie (hoofer Joanne Clifton hotfoot from Strictly) arrives in Manhattan from Kansas with no job, friends, money or place to stay. She insists that she is broke, not poor – the difference being that broke can be fixed. When skirtchaser Jimmy (Sam Barrett) catches her eye he installs Millie in an all-girls’ rooming house and she sets her sights on self-improvement. The landlady Mrs Meers (soap star Michelle Collins) is, for reasons not specified, pretending to be a Chinese woman of the Widow Twankey variety.

It’s not the most modern of plots and seems to be crying out for an update. The singing is great (especially Katherine Glover) and the wacky period dances – the Charleston and Black Bottom – are joyously recreated (thanks to director/choreographer Racky Plews). One sequence sees the typing pool tap-dancing at their desks and is a real giggle. Millie and her boss (Graham McDuff) do a G&S-inspired patter song that’s clever and catchy.

The set is all silvery grey and, alas, this monotone affects the show overall. A lot of the songs aren’t distinctive enough considering the great jazz tunes that came out of the 1920s. And the squealing, shrieking flappers (like the mice from Bagpuss) get very wearing very quickly. And, without wanting to get all PC, another couple of problematic issues cannot be ignored. The Mrs Meers character is impersonating a Chinese woman and embodies some of the most dated and ghastly stereotypes. Her laundrymen minders are Chinese actors playing and speaking Chinese but this really doesn’t make the stereotype alright. The debate on “yellowface” continues. More difficult still is the show’s subplot regarding “white slavery”. Back in the early 20th century this was a manufactured media scare that suggested white women were being kidnapped and transported to China. In Millie, this is all played for laughs, which is horribly at odds with current headlines about sex trafficking – a very real issue that ain’t funny at all.

The show is frivolous and fun and has its moments, but director Plews needs to tighten things up.