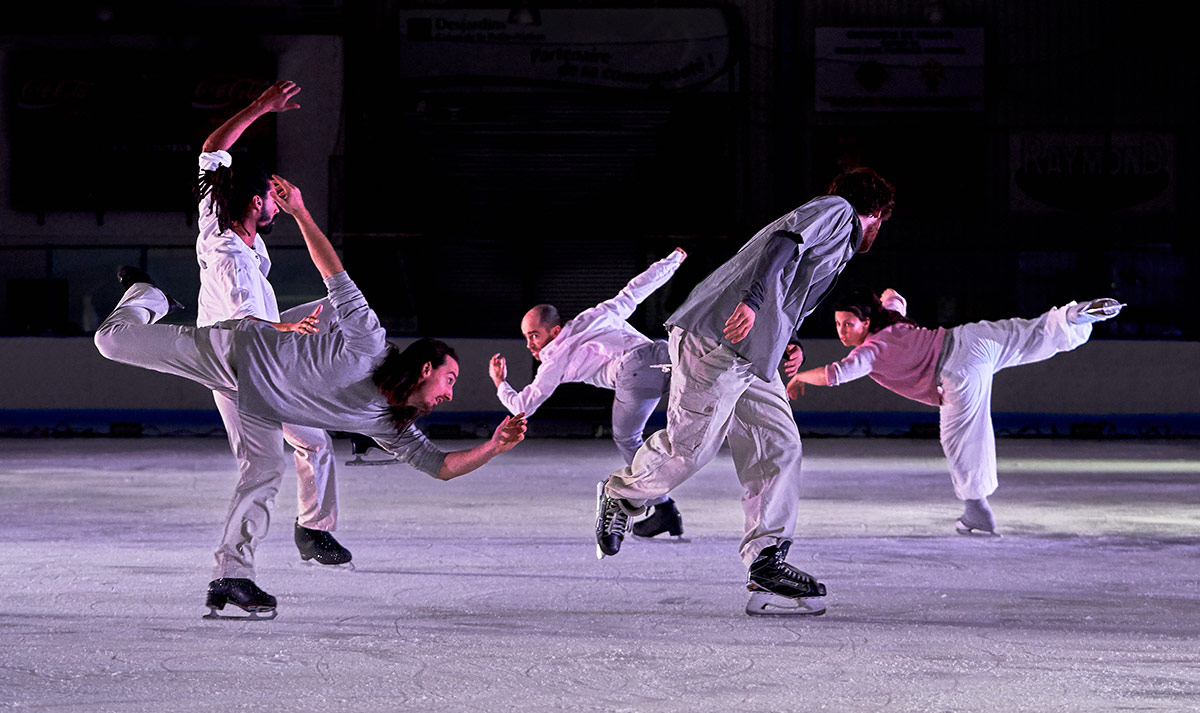 Seated on the ice, the audience encounter five wraiths, emerging from the mist, circling, increasing speed, their blades taking them faster and faster in a dance of encounter and near miss. This is ice dance on a different level. A contemporary Rite of Spring? Or will it result in harmony?

With a throbbing musical score, the skating artists take you on a journey of twenty-five minutes of mesmeric athletic dance, displaying skills of a different kind to those seen at Olympic competitions or Disney on Ice. This is Glide, developed by Le Patin Libre as a choreographic development ‘allowing the human body to move through space while being liberated walking, running, crawling or other natural gestures’, an innovative technique which allows for new, and frankly amazing possibilities in the artform. Based in Montreal, this company displays a forward-thinking attitude to dance as both an entertainment and something relevant to the community it serves.

Lately much contemporary dance has become stale and, dare I say, formulaic, so how can the form find its way forward? This show demonstrates a fantastic new future perhaps, freeing the artist to develop stories and emotions in a different way as well as creating new skills. It is interesting to learn that company member and composer Jasmin Bolvin was first hired as an electrician. As a classical cellist, his route to dance was through amateur ice hockey and an interest in urban culture. Now a skating artist, he creates electro-acoustic soundtracks for the company as well as performing himself. The complexity of the choreography to his score strikes you as dangerous but calming. The dancers never stop weaving in complex patterns and positions as they interact with each other closely or split, using the occasional verbal cue.

Split into two halves, the show offers two distinctly different pieces. The first draws the audience into the results of a destructive accident and its resolution. The second half offers beautiful pas de deux blending into pas de trois and so on. The athletic, technical and lyrical skills are stunning, inducing loud gasps from the children in the crowd. As an audience member, you must be prepared to be close to the action and enjoy the cold, but you are amply rewarded. The finale enables the skating artists to take their bow just a few feet from you, as the ghostly figures become humans with broad smiles. If I get the chance to go to heaven in the next life, I want it to be like this.

It is evident that the ethos of the founder/director Alexandre Hamel shines through every aspect of the show. It is accessible to every age group through its beauty, thrilling skills and emotional impact.