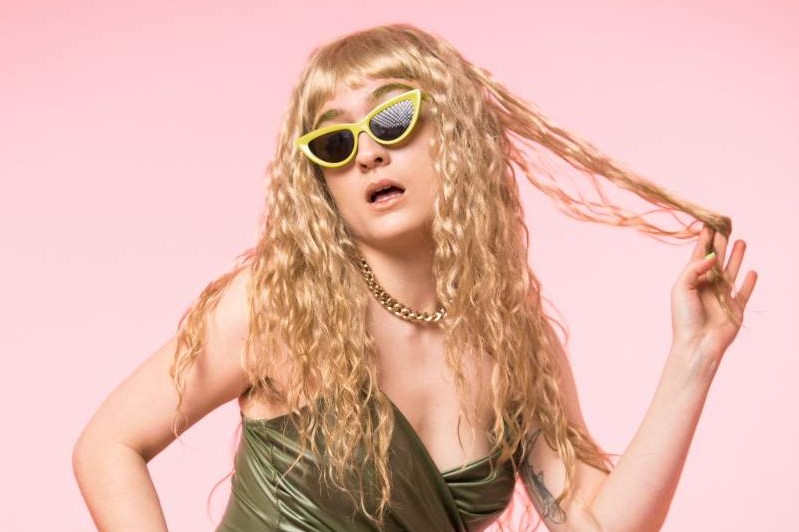 Exuberant and uncompromising burlesque clowning with a curiously sweet core

Now, this is a Fringe show! Occupying some weird liminal space between clowning, burlesque, and performance art is Trash Salad, the brain child of actress Rosa Garland. Uninhibited, frivolous, and often baffling, it’s an outrageous show that waltzes between silly, sexy, and occasionally rather sad with messy aplomb.

Garland arrives on stage with her head covered by a bin bag, out of which she promptly chews her way. It’s clear that she’s a force of nature. Adopting a French accent outrageous enough to give John Cleese pause (Garland herself is from London via Whitley Bay), she demands to know if we, ‘Want to see some tits?’ Before long she’s stripped down to a green thong, pulled and eaten a tomato from within said garment, and pretended to give birth to a lettuce.

It’s incredibly strange, and utterly unpredictable. Garland has clearly created her own world and is expressing herself entirely on her own terms. If we’re happy to go along for the ride, all well and good. And as a ride, it’s a real rollercoaster, zipping through lip-synching, a dance with another performer dressed as the Creature from the Black Lagoon, a video of someone making tuna jelly, and pretending to be a tortoise humping a croc sandal from another video. Before long the stage resembles much of Edinburgh outside, littered with food debris, various items of clothing, and lashings of salad cream.

Of course, it’s not to everyone’s taste. Someone is less than impressed to find themselves in the condiment splash zone and, in one of the more entertaining walkouts this year, storms out after failing to convince his friends to follow. Trash makes the most of it, screaming imploringly after him as he goes, the tail between his legs slightly stained by Heinz’s finest. Despite such shenanigans, Trash Salad isn’t a confrontational show. Within the whirlwind, the eye of the storm is a sweet yearning for connection. That, and a celebration of all the daft and slightly gross stuff one can do with their body.

Exuberantly daft, frequently bizarre, and fuelled with an infectious, punky energy, Trash Salad is an uncompromised vision of a performer taking wild swings without fear of alienating a potential audience. It might be a little too weird for some, but for the most part it’s clear that Rosa Garland’s lettuce-loving burlesque clown has made the connection for which she pines.