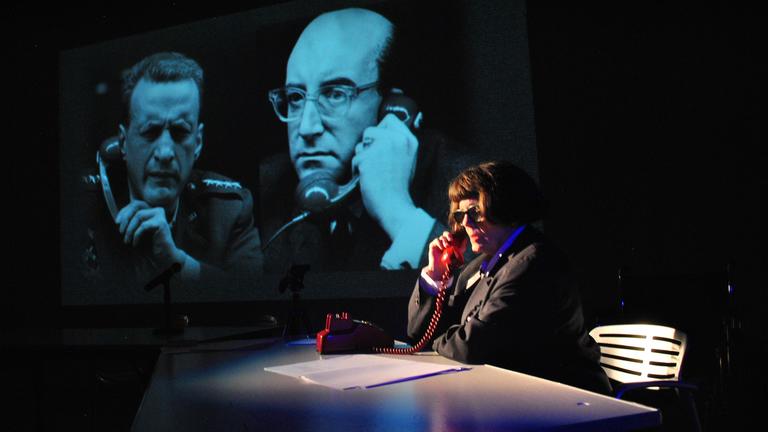 The Take Me Somewhere festival is a celebration of theatre, performance and live art and looks to fill the gap that was left in Glasgow’s performing arts scene after The Arches closed down several years ago. This year there are many great shows during the festival and this includes a new work by performance duo Split Britches. Peggy Shaw and Lois Weaver have been working together for nearly 40 years and the connection between the two performers makes Unexploded Ordnances (UXO) an interesting and though provoking experience.

The 1964 Stanley Kubrick movie Dr Strangelove is the starting point for the performance. Shaw takes on the role of the verbose and loud General and Weaver embodies the role of the calm and mild President. To the back of the stage are three large monitors on which large maps are projected. This presents the idea of global surveillance and sets a tone of anxiety and apprehension that is maintained throughout the show.

Unexploded Ordnances (UXO) begins with Weaver bestowing a very brief history of the Easterhouse area of Glasgow and the Platform venue that is hosting the early evening performance. We are then taken into the War Room (or a “Situation Room” as it is to be called during the performance) where a group of ten elders are chosen from the audience to sit in a circle and invited to speak openly about their fears and worries.

Unexploded Ordnances (UXO) shows how personal anxieties can have catastrophic effects. It also shows how global issues can affect people on a personal level. Shaw and Weaver have a relaxed and reassuring manner that allows the “Council of Elders” to open up and expose themselves in a public arena. The performers reassure the elders that they are in safe hands and this presents a vulnerability that is powerful to watch, but also very unnerving. At the beginning of the performance the audience were instructed to set the alarm on their phones to go off after 59 minutes time. The ringing of the alarms marks the beginning of the end of the Unexploded Ordnances (UXO) where the audience are left thinking of our own mortality and how we can achieve our hopes for the future.

Take Me Somewhere continues until Mon 4 Jun with performances at various venues throughout Glasgow including Tramway, the Tron Theatre and SWG3.