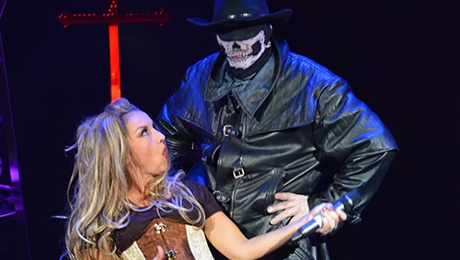 A sultry, gothic affair fit for a rock star with top class comedy throughout

Somewhat tacky but with rock-star glamour

Steve Steinman’s rock musical comedy is a sultry, gothic affair. The whole set-up onstage is a somewhat tacky reminder of the traditional ghost train but with added rock-star glamour that creates the perfect setting for the performance.

There is a sense of community in the audience and Steinman (writer, director and main character) receives an almighty cheer when he appears as Baron Von Rockula for the first Meatloaf song of the night.

What makes this performance all the more spectacular is that none of the songs are pre-recorded. The live rock band onstage go by the name The Lost Boys and create a real atmosphere in the theatre. It does feel like you are at a rock concert rather than a theatre show. In some ways that’s a negative, as it does limit slightly the potential audience.

This play, although focused on the music, does have a loose story line involving Baron Von Rockula, a centuries old vampire, who falls in love with school girl, Pandora Rosie Box, when she appears for a ride on his Ghost Train.

One other character who really steals the show is Bossley the Janitor. He provides most of the comedy throughout and receives deserved laughter and cheers. At one particular point he appears on stage on a small funfair car with a clown’s horn strapped to the front. It is revealed he has added this shortly before the performance, unbeknown to Steve.

The end of the show summarises the entire performance to a T. Every single man and woman in the audience is on their feet dancing, clapping and singing along to Bat Out of Hell and We Will Rock You, so much so that the whole Grand Circle shakes. This is a highly thrilling performance, but definitely more a treat for the adults than a family affair. Anyone who has a love for rock music will find it hard not to obsess over this incredible performance. The band and performers truly put on a show.