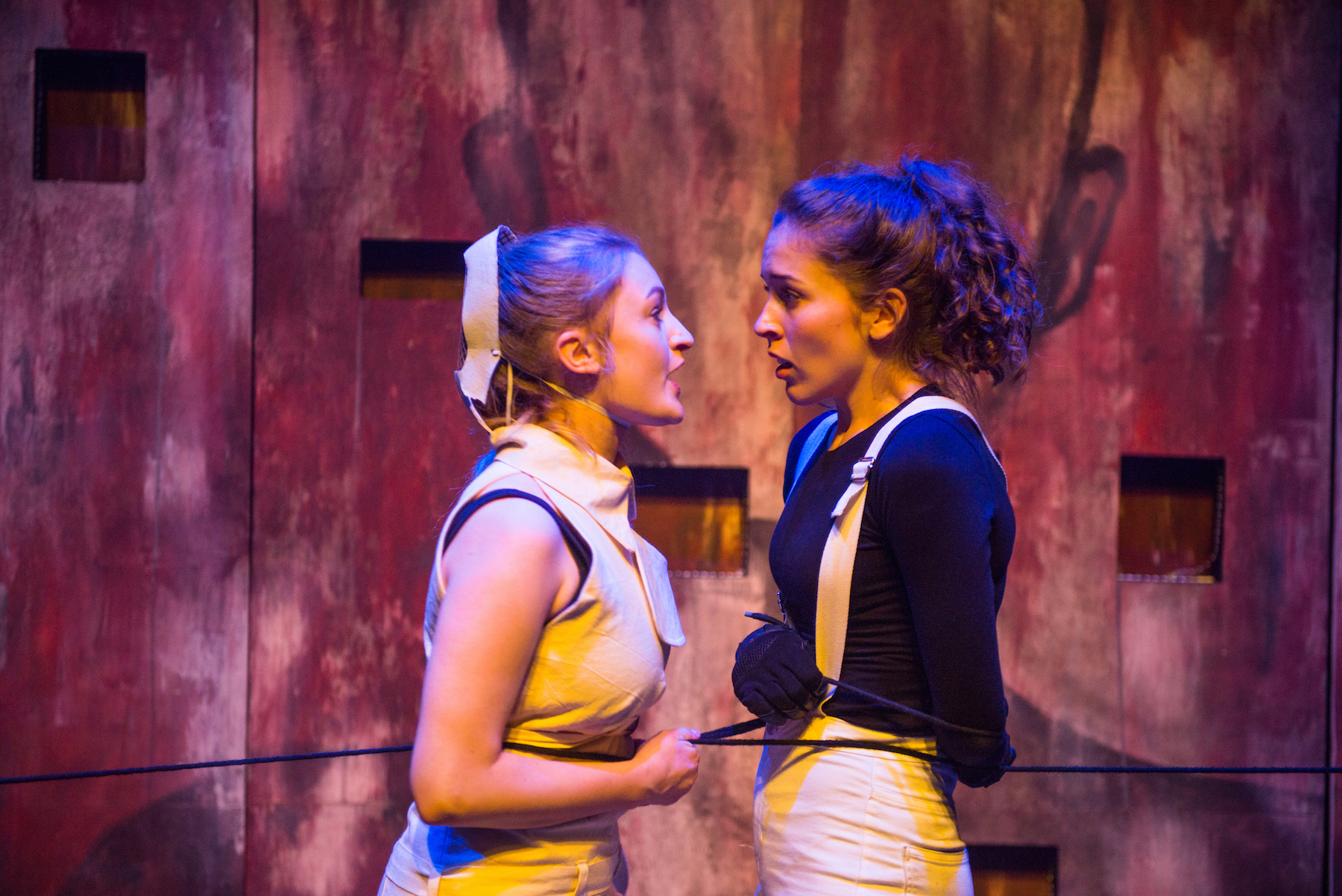 The action opens with choreographed chaos: bodies and faces contort, one performer flails utterly out of control and somebody even walks backwards. Littering the stage like automata, and dressed like rejects from A Clockwork Orange, distorted laughter fills the air before being replaced by screaming. The colours are nailed to the mast from the off; this is a world where everything is broken in a whirling maelstrom of disturbing motion.

The central narrative concerns the titular VENT, a cutting-edge institution where your worst fears are “simulated” in eight minute sessions using sophisticated robots (think crash test dummies fitted with AI). From a mother who wants to kill her baby, a girl flunking uni and a young man with body dysmorphic disorder, the various issues being examined arise naturally out of the setting. “This place is supposed to take your problems away” states a bad friend, finding himself forcibly clamped and removed as his words hit home in a delicious irony. A robotic nurse, unable to hit her mark to shake hands or observe that her patient has thrown their chair across the room rather than sit in it, is mined for comedy. And it works: the sheer artificiality of the environment is echoed in the fake staff, friends and conversations paraded about the place and hailed as wonders.

However, it’s not all earnestly serious: we are also afforded a look behind the scenes. Complete with a generic jingle before every announcement, VENT is doing its level best to present itself to the world as a safe and successful scientific institution, where staff wear names badges and it’s all so personable yet strangely impersonal. Interacting like a sweetly failing married couple, therapist Phil (Matthew Gallagher) and janitor George (Daniel Cawley) provide a subplot away from the ‘inmates’ of VENT. George in particular is a delight: with his Yorkshire accent and deadpan delivery, it’s like he’s escaped from a Beckett play. These two are also used as a snide comment on social standing, with Phil marvelling at how the janitor can fly under the radar while he is always under pressure and scrutiny. Ultimately, underneath the comedy and pathos, both come to realise how they are damaged and their problems unite them. Such an insight is never attained by the buffoon Chief Manager, the only character not dressed in black and white. Towering above the rest of the cast in white suit with red buttons he’s a source of comic relief who (thankfully) never veers into complete caricature.

Unfortunately proceedings run out of steam slightly in the second act, with a sense of repetition creeping in with another ‘break down’ dance sequence and more angsty monologues, making it seem like there is not enough to the narrative or theme being explored to cover the run time. This isn’t helped by characters previously encountered returning to enter the VENT, with the same issues being aired and examined again. It feels slightly over-stuffed and perhaps some judicious pruning could have prevented this.

Performed with great energy, and looking at various topics whilst skilfully weaving these around a setting dripping with dystopian dread, VENT is quite an achievement from the Scottish Youth Theatre National Ensemble 2018. Though it may examine large and weighty issues using nightmarish imagery, it is a production counterbalanced by some truly witty moments, which prevent it from becoming preachy.