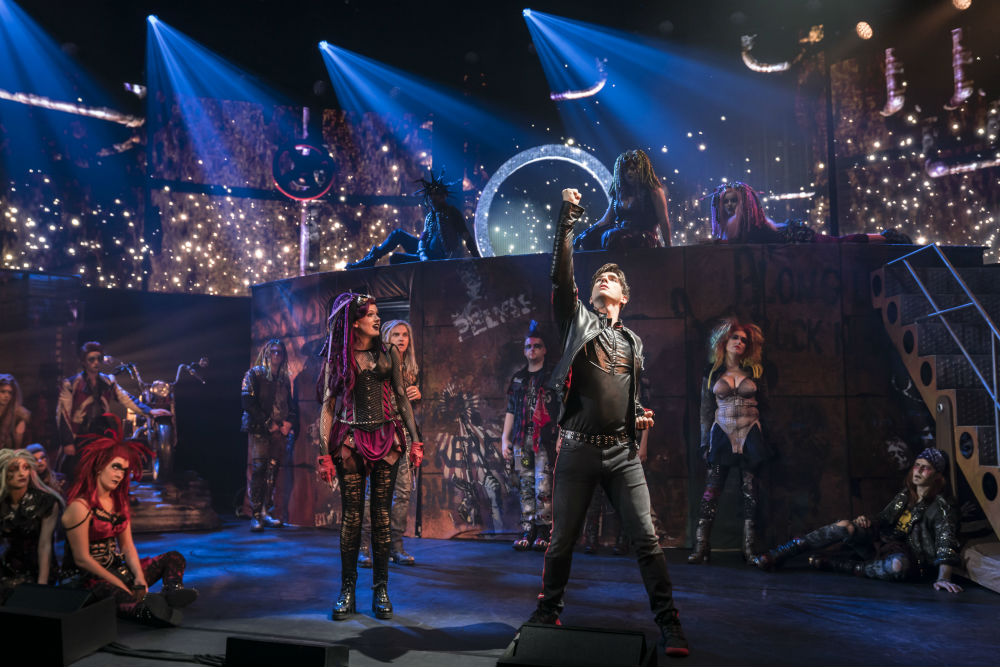 We Will Rock You

Queen musical is spectacular but soulless

The return of perennial crowd-pleaser, We Will Rock You is perhaps a predictable response to the fresh wave of interest in the music of Queen generated by last year’s film Bohemian Rhapsody. Set in a distant future dystopia, a world in which music is banned and people’s lives are controlled by a nefarious corporation called Globalsoft, We Will Rock You attempts to pay homage, in an unashamedly silly and frivolous way, to the rebellious and liberating power of rock.

If you find the above sentiment cringe-worthy, the chances are you will also intensely struggle to get on board with Ben Elton’s script, which serves merely to create connections (painfully tenuous ones) between each of the 25 Queen songs featured in the show.

Let’s face it, the audience is not here for the script – which is just as well, because it is, to be perfectly frank, an abomination. However, the weak storyline and dialogue shouldn’t, in theory, condemn the show because it has the precise tone of a pantomime – resolutely untouched by subtlety, nuance or anything approaching a genuine emotion. This formula could – nay, should – work as a vehicle for the songs, ensuring there are not too many distractions from the main source of its appeal. The fact that audiences are drawn to it (in droves, consistently over a period spanning nearly two decades since it premiered) primarily for the music is a truth universally acknowledged, to coin a phrase. Yet, even within this framework, this particular incarnation of We Will Rock You presents a whole heap of inconsistencies and unanswered questions.

The first of these is: who is the target audience? So many aspects of the story and characters make it feel like a school production, and the panto-vibes create the general impression of family friendliness. Yet, the tone of the humour is, at points, overtly and crassly adult, with innuendo significantly less gentle and ambiguous than an actual pantomime. It is therefore appropriate that most of tonight’s audience are grown-ups. The obvious target demographic might therefore be die-hard Queen fans who just want to let their hair down and have a ruddy good time (unencumbered by unnecessary nuisances like ‘character development’ or ‘meaning’). Fair enough. The only problem, however, is that the versions of their beloved songs here are so sanitised by musical theatre presentation that much of their power and appeal is diluted, and the result is unfortunately bloodless and anodyne, despite the universally strong vocal performances from the cast, including standout leads Ian McIntosh and Elena Skye.

Another striking paradox is the fact that the show relies heavily on cultural references, which have been updated for 2019, yet this element itself manages to feel deeply anachronistic. Tame jokes about X Factor being rubbish garner some of the biggest laughs. Perhaps this is natural, given the safe and uncontroversial tone the show is going for in order to carry a straight-forwardly feel-good production. But if so, why include a joke about gender identity, in which a character – the villainous face of an evil and dogmatic future society – presents a seemingly interminable list of possible gender identities, the suggestion being that these sorts of ideas are evidence that society has become unreasonable and that things have gone “too far”? Whatever you think of the joke itself in terms of humour, it’s not exactly apolitical.

Ok, ok, I know -this is neither Question Time, nor Beowulf, and it doesn’t pretend to be. It’s just meant to be a bit of fun. So, let’s focus on the fun stuff: the set design and lighting effects are, without a doubt, spectacular. Headache-inducingly dazzling, in fact. The costumes are similarly ostentatious, and the choreography largely channels the requisite level of camp to give the whole thing a semblance of coherence. Unfortunately though, some of the dancing – particularly in the ensemble numbers – is not quite slick enough to give the show the conviction it needs to stand up. The overall impression is of an am-dram production with an unspeakably massive budget and some incongruously talented principals. While the sheer joy of hearing Queen songs performed live and performed well is always going to have significant appeal, the lengthy run time and the torturous, relentless vapidity mean it begins to feel more like some kind of endurance test. Sadly, after nearly three hours of We Will Rock You, God knows I want to break free.