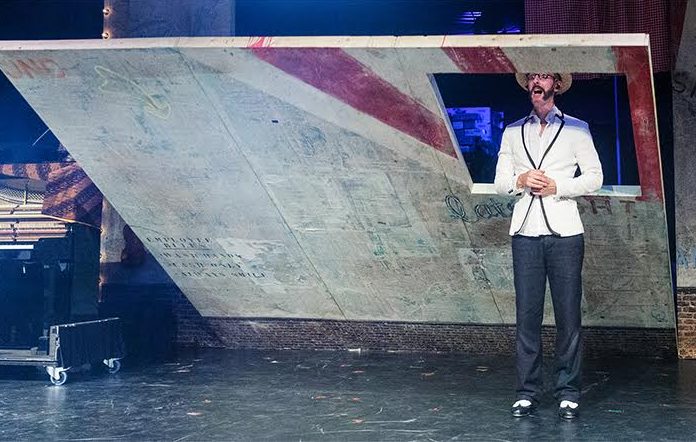 Wëreldbänd are a quintet of Dutch multi-tasking clowns, with a hint of steampunk about them. They do music, party games, and a whole heap of Keatonesque pratfalling. It’s all jolly good fun.

The basic setting for this show, introduced by a Charleston-y signature tune of the same name, is the fairground. Recurring characters include a patois-spouting huckster, encouraging the audience to roll-up, roll-up and take part in his oversized fairground games, and a barbershop group singing songs like Uptown Funk and Raindrops Keep Falling On My Head in German.

These dapper chaps have a small museum’s worth of instruments on stage, on which they knock out some nifty old-time show tunes, while also incorporating them slickly into their physical comedy routines. Trombone slides, it appears, can deputise in all sorts of musical emergencies. They also play up the obvious silent movie influences by interacting with some clips projected on the backdrop. These homages are a nice touch and place Wëreldbänd proudly in a grand tradition.

An old man sketch is a rare bum note. Structurally it’s sound, but the zimmer-using old man character has the tremors of Parkinson’s and implied dementia (he’s forgotten the words to Unforgettable). It’s probably no more than cultural differences, but you wouldn’t be wrong in finding it slightly insensitive. A sequence flirting with a girl in the front row – two of the group squabbling over who gets to serenade her – also reeks of an earlier era. It’s impeccably executed, as everything is, but it’s a little dated as a concept.

They finish with some first class slapstick though, spanking each other upside the head with their instruments, set collapsing around them. They’re a supremely talented bunch and this is highly polished slapstick which is very well received.